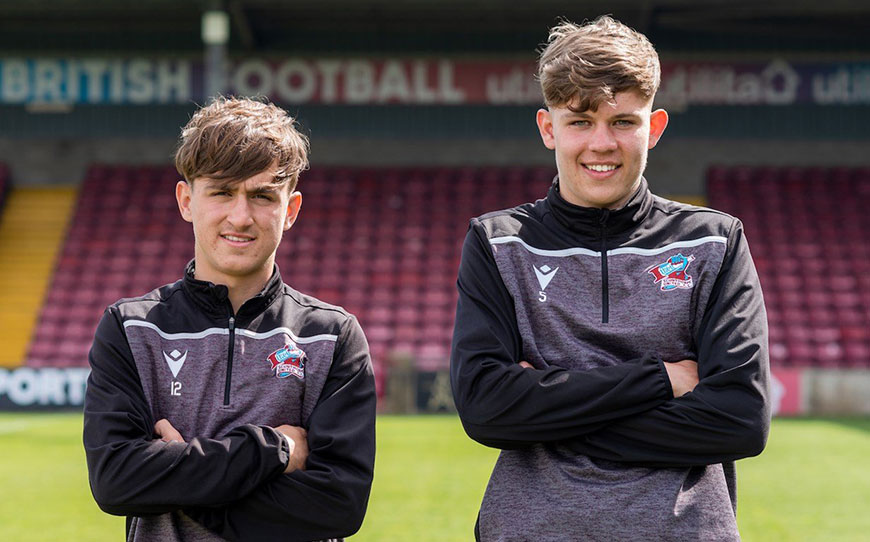 Gallimore has been associated with the club since Under-8 level, while Wilson joined the club as an Under-11.

Attack-minded midfielder Wilson has been a mainstay in the Under-18s this season, scoring four goals. Elsewhere, defensive-midfielder Gallimore has also been a regular member of the youth side, chipping in with two goals of his own.

Academy Manager Tony Daws told the club website: “We are absolutely delighted to be able to offer four out of the eight second-year boys professional contracts at the end of this season. Congratulations to the boys and a big well done to them on their development and progression, and we wish them good luck going forward.

“It’s excellent news to have four players being offered professional terms from the same group. It continues to demonstrate that there is a pathway for players to progress through the system to be a professional footballer at Scunthorpe United and it motivates the academy staff and players of all age groups to continue their tremendous hard work.

“I would like to thank all of the staff that have worked with these boys at some stage, from our Under-9s coaches right the way through to the Under-18s coaches, and the first team staff that have also assisted in the player’s development.

“Very importantly, we must recognise and say a big thank you to the Chairman and the Board of Directors for their fantastic commitment to our academy and for providing this life-time opportunity to these boys.”

The Iron also announced that Ben Crosher, Oliver Kemp, Patrick Virgo and Alex Wilkinson have been informed they will not be offered professional terms.

Daws continued: “This time of the season is always difficult as we as a football club have to make decisions on our second-year scholars’ futures in professional football. Everyone involved in football is aware that not all boys make the difficult progression from schoolboy to youth, and then onto be a professional player.

“For us as coaches, it is a ‘bittersweet’ time; we have the joy and satisfaction of a job well done when a boy has developed well enough to be offered a professional contract. However, we also have the genuine disappointment and share in their sadness when a boy has to be released.

“As always, we have an exit strategy for the boys that are released as we offer advice and guidance in terms of getting trials at other clubs, the non-league pyramid, progression to universities in this country and advice on American education and football scholarship opportunities.

“The tutors at John Leggott College do a fantastic job ensuring that all of the boys attain the best grade possible, as most boys achieve distinction status. The boys also complete an NVQ, as well as taking their first steps on the coaching ladder, qualifying as FA Level 2 coaches.

“The boys have also undertaken a personal development and life skills programme, delivered in conjunction with League Football Education. LFE’s Life Skills programme aims to raise awareness and empower apprentices with knowledge and skills to deal with the demands of football and life.”