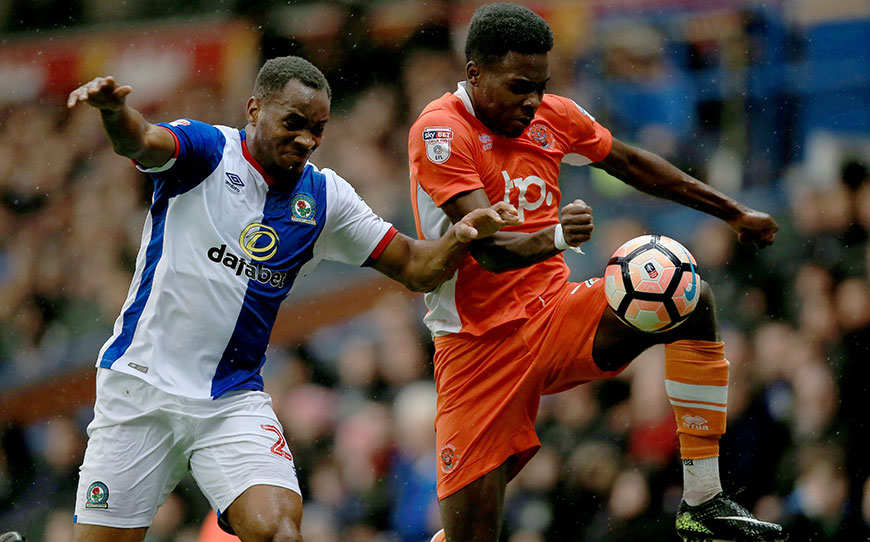 The Blackburn Rovers full-back Ryan Nyambe has outlined how his early life experiences have helped him to adapt and flourish since he joined the club as a schoolboy.

Nyambe, who was an apprentice just 12 months ago is now Rovers incumbent first team right-back and has come a long way in a short space of time in almost every sense.

After making his first team bow last term, the 19-year-old has featured 23 times for Rovers i9n the present campaign and has been an almost permanent fixture since making his league debut against Brentford in November.

Yet his attitude and initial love of the game was fostered playing on the streets of Katima Mulilo in Namibia before he moved to Manchester at the age of 10.

Nyambe had lived with his auntie and uncle before he made the move to England to join his Mum, who had already travelled to the UK in search of a better education.

“I was born in Namibia and moved to Manchester at the age of 10,” he told the Lancashire Telegraph.

“It was a really big change. The first time I came here it was snowing. It was the first time I had ever seen snow before. “I’d played football in Namibia, but not for a team, only in school.

“Football was a big sport there, everyone loves football, they all watched the Premier League and loved Manchester United.”

Nyambe quickly joined a junior team in Manchester, and within three years he was earning trials with professional clubs.

He continued: “I joined a local team when I first moved here. I was playing with my school as well and two of my friends got scouted for Blackburn and obviously I wanted to get scouted as well. It was just a case of working hard and then eventually that happened.

“I was 13 when I first signed and I worked my way through the age groups. We used to train on a Monday and a Thursday afternoon so they put transport for us to come in to training.

Back in Namibia, Nyambe’s rapid rise to prominence has gained plenty of attention. He has already met the President, Hage Geingob and is fast becoming one of his home country’s most recognisable stars, surprising even himself in the process.

“I was looking to play three or four games after Christmas so I have ended up playing a lot more than I thought. I’m really grateful for every opportunity I have been given and I have taken them. I just thank God that here I am now. Every day I go in to training with a big smile on my face and in to a good atmosphere.”

While Rovers may have languished near the bottom of the Championship this term, Nyambe has seized his chance. Trusted by both Owen Coyle and new manager Tony Mowbray, the young defender is doing all he can to block out the stress of a relegation battle in a bid to help his team to safety.

“It has been a really hard situation because when you start or go on the pitch you don’t want to make a mistake. You don’t want to let the team down because if you do then it only adds to our problems being down at the bottom.

“You have to put that to the back of your mind and do everything you can. I have had to adapt really quickly and I did it in such a short space of time, but now I’m getting used to it. I feel a part of the team and feel really comfortable.”