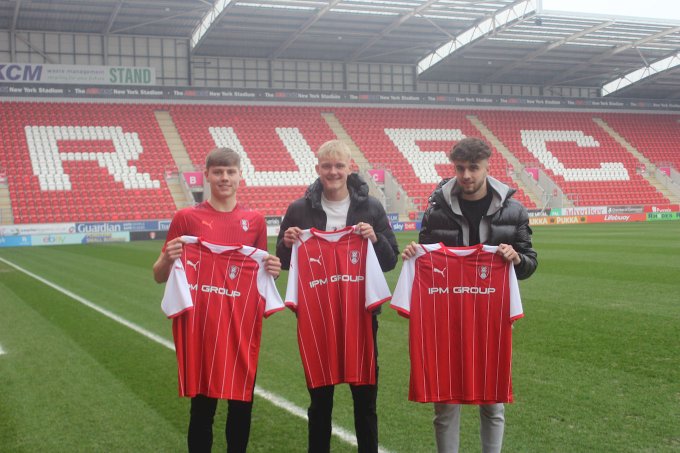 The Academy stars have all been in impressive form for the U18s this season and have been rewarded with their first professional deals after catching the eye of First Team Manager Paul Warne and the rest of his coaching staff.

Forward McGuckin has been finding the net on a regular basis for both the youngsters and Northern Ireland’s U19s and will now be hoping to emulate the likes of Joshua Kayode, who advanced through the Academy to become a first team regular under Paul Warne.

Midfielders Durose and Warne have also impressed, having both played a part in the Millers’ Papa Johns Trophy fixtures this season and will also join the senior ranks.

This is the first time since the 2017/18 season that the Millers have offered pro contract to three Academy graduates and provides evidence of the progress made by the Academy in recent years, with the likes of aforementioned Kayode and Ben Wiles performing regularly for the first team.

Rotherham United Academy Manager Richard Hairyes was delighted to see the three apprentices rewarded for their hard work and reaffirmed the Academy’s commitment to providing a pathway for the club’s brightest academy prospects.

“It’s a brilliant day for the Academy and the club as a whole,” Hairyes told the club website.

“We’re starting to produce some really exciting players, which I think you can see right through the age groups and it is an incredibly exciting time for us.

“I think first and foremost, the three lads are exactly the type of characters we want at this football club.

“They are unbelievably hard-working, great human beings and above all else, leave everything out on that pitch.

“We’re really pleased in the Academy office, but we’re not stupid, and we know we have to continue working hard – in particular alongside the First Team – to ensure that this isn’t just a flash in the pan.

First Team/ Development Coach Matt Hamshaw was also full of praise for the Millers’ latest professional players and admitted he was excited to working with the trio at Roundwood for the 2022/23 campaign.

“We’re delighted to be able to offer professional deals to Curtis, Ciaran and Mackenzie,” Hamshaw said in support of Hairyes’ views.

“Professional contracts are not something we just hand out as a token gesture. They need to be earned and it is fantastic to reward all three lads, who we’re all extremely excited about.

“Both Ciaran and Mack have been here right through the Academy process and have both matured very well, both as people and as footballers.

“We’ve all been extremely impressed by Ciaran and his international call-ups for Northern Ireland speak volumes of how the football club and Academy is beginning to receive recognition from further afield and that is thanks to the tireless work that goes in from everyone involved.

“Mack is another promising player, who has shown what he is capable of on numerous occasions, both for the U18s and in our Papa Johns Trophy games. Like any young footballer, he has got aspects of his game that he can improve on, and we’re excited to work with him to help him reach his full potential.

“Some people may just assume that because of his surname that he’s had it easy, but rest assured that certainly has not been the case and if anything it has arguably been harder for him to win a contract than anyone else we’ve had here.

“Curtis came late in the programme from Nottingham Forest and the fact we were able to pick him up from a side like Forest ahead of a number of other clubs is another example of the reputation we have for giving young players opportunities here.

“As we saw with Ben Wiles and Joshua Kayode representing us at Wembley, the opportunities are there for these young players, but they have to work for it.

“Our Academy work extremely hard to develop everyone, not just as players, but as people as well. Which means that they will have the best possible chance to go on and have successful career, whether that be in the game or not.”