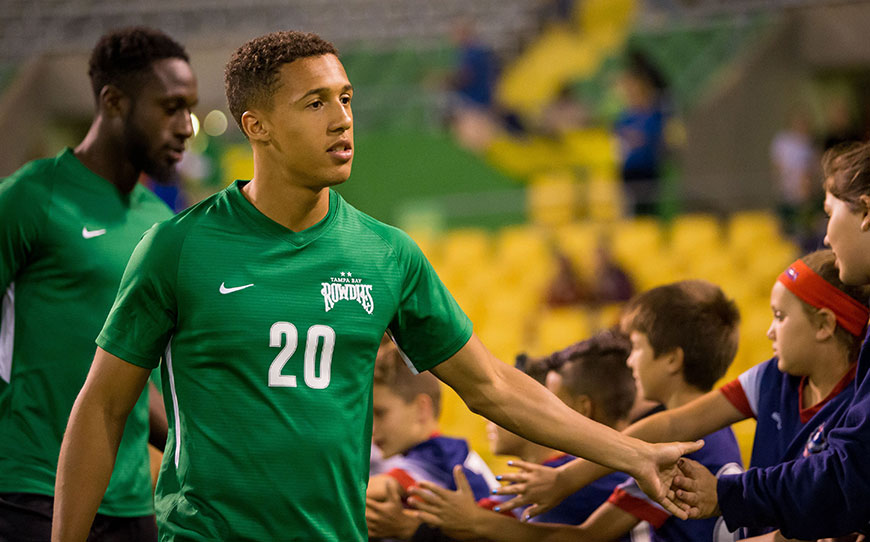 Back in the summer of 2018, Caleb Richards was in search of a new club after being released by Blackpool.

The young left-back quickly found a new home with Norwich City, which has seen his fortunes take a considerable turn for the better, with the catalyst being a hugely successful loan spell at Tampa Bay Rowdies last calendar year.

“It was in my mind to play in a different country at some point because I love to travel,” Richards told LFE. “It’s not just a normal loan spell because you’re quite far away from your family and your usual environment and you get to experience a new culture.

“I lived in a house with a lad who was on loan from Sheffield United, Jordan Doherty. The facilities were amazing – we had a pool and a gym, the training surfaces were great and we had all the equipment we needed.

“We lived in St. Petersburg in Florida, which is where the team train and play games. There are beaches all over and Tampa is the main city nearby, where all the restaurants and shopping centres are.

“When you go abroad, it’s really important not to just stay in the house and actually get out and experience the local culture. It helped us get closer to the rest of the team as well because they’d take us around to different places.”

The 21-year-old was immediately exposed to the USL Championship club’s community campaigns, with his involvement in a range of activities allowing Richards to make a positive contribution off the pitch, as well as on it.

“One of the biggest shocks was the media attention,” he said. “Everything we did was very extravagant. We had to do a lot of media activities and there were plenty of visits to various places to promote the club in the community.

“There was one event where we were in a restaurant making food and serving it to some young fans, so that was great to interact with them. There was also a fan who had a heart condition and we’d visit him every week.

“That’s something that leaves a lasting impact even during a short stay because that helped him through a tough time. Doing these things has made me much more at ease communicating and the practice has developed my skills in that area.”

On the pitch, Richards was an ever-present for the Rowdies, featuring in all 36 league games and performing well enough to earn the Mid-Season Young Player of the Year award.

“I didn’t expect to play so much, I think I reached 40 appearances including cup games,” he continued. “I played the left side of a back 3 and I was having to deal with different types of players. Some strikers would be big and powerful, others would be small and quick, so I was having to adapt my game from what I’d usually face in an Under-23s environment and that was really beneficial.

“Our coach used to be a defender as well, so he gave me plenty of advice on positioning and improving in the air, so I feel I’ve improved a lot defensively. When I came back, I felt really sharp in training and so much more comfortable in games.”

Despite his encouraging development as a player, it is the off the pitch experience that has left the biggest impression on Richards.

He said: “I knew I was going to make progress playing with experienced players and learning from new coaches, but I think I developed as a person even more by gaining more confidence on and off the pitch, taking that American easy-going and happy nature that they all seem to have.

“I feel like I’m a bigger character in the group since coming back. I noticed when going out to Yeovil recently that compared to my previous loans, I was a much more outgoing character joining up with them, which helped me settle in quicker.

“It was probably the best 10 months I’ve had. I think the fact that you’re doing so much in the local area, in addition to all the training and games, just makes it an amazing experience and you’re constantly creating memories.

“One thing came up on my Snapchat memories the other day, where we went on a boat trip and saw dolphins up close. A couple of baseball and hockey games we went to have come up recently, too. It’s those memories that stand out just as much as the playing side of things.

“We visited 12 or 13 states in the Eastern Conference, like New York, New Jersey, Pittsburgh and Georgia. We got to see a snapshot of these places, which was really interesting. Oklahoma was a ghost town but had interesting architecture, while Memphis was so lively as we were next to Beale Street, which is like a big party. Seeing those different cultures makes me want to explore more.”

The opportunity to play abroad and gain new life experiences is part of Norwich’s philosophy to develop well-rounded youngsters through their Academy.

“The club is very focused on personal development opportunities,” said Richards. “We have a lot of mental health workshops and we have a session after training focusing on a different life skill almost every week.

It makes us more rounded people, which also helps us become better players because they make you more mentally prepared for the challenges that football presents.”

In recent months, nutrition and cooking has emerged as a keen interest outside of football for Richards. Having committed to becoming vegan, the Canaries starlet pushed himself out of his comfort zone by releasing an e-book about his transition to a plant-based diet.

He added: “Learning to cook is an important life skill, regardless of football, but obviously it does help when you’re trying to stick to a balanced diet. We have plenty of free time as footballers and I’ve used some of that to develop my cooking.

“A few of us in the Under-23s watched the documentary Game Changers and decided to try a meat-free diet. It reduces inflammation when you eat a lot of vegetables and I noticed after a couple of weeks that my speed was increasing during the tests that we do.

“A lot of my meals are just the same as before, except I use a meat-free substitute like quorn. I’ve started to incorporate chickpeas and lentils into my diet now and I’ve enjoyed trying new foods.

“English was never my strongest subject in school, but I just started to document my experience in my spare time while on loan at Yeovil and then the lockdown gave me further encouragement to invest more time into writing a book.

“A lot of people from all over the world have bought it and I’ve heard from a lot of people that have decided to give it a go. It’s definitely exceeded my expectations of what I thought it would achieve and it feels good to know I’ve been able to change perspectives and educate people about a vegan diet.

It’s definitely spurred me on to try more things out of my comfort zone. It’s good to be known as more than just a footballer because football is only part of your life.

“If you get released or an injury takes you away from the game, you’ll be left with nothing and that can be very difficult mentally, so it’s really important to have other aspects to your identity.”