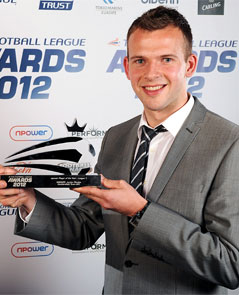 Huddersfield Town’s Jordan Rhodes has been named the npower League One Player of the Year at the Football League Awards 2012.

Boasting a ratio of a goal a game, it is easy to forget that Jordan is just 22 years old.

So far this term, his haul includes a double brace against Sheffield Wednesday and five strikes at Wycombe Wanderers.

Since joining from Ipswich Town in the summer of 2009 – where he was prolific in the Tractor Boys youth and reserve teams – Jordan has over the last two seasons topped the Terriers’ scoring charts with 23 and 22 goals respectively in all competitions.

With two months to go in the current campaign, he has already eclipsed both of those totals.

On winning his Award, Rhodes said: “It has come as a shock, I didn’t expect to win the award with so many good candidates. My fellow nominees Johnnie Jackson and Ched Evans are equally, if not more, deserving of this accolade.”

“As a striker, scoring goals is what I live for. It is a fantastic feeling when the goals go in because I know they can’t always hit the back of the net.”

“It is not a matter of who scores the goal though, it is about getting the three points at the end of the game. We are all working towards the same aim and because they are such a great bunch of lads at Huddersfield it makes it easier for me to do my job.”

The shortlist was produced after Managers from every League One Club were asked to submit their top five players of the season, excluding players from their own Club.

The npower Player of the Year for the Championship was won by Southampton’s Rickie Lambert, while the League Two Award went to Swindon Town’s Matt Ritchie.