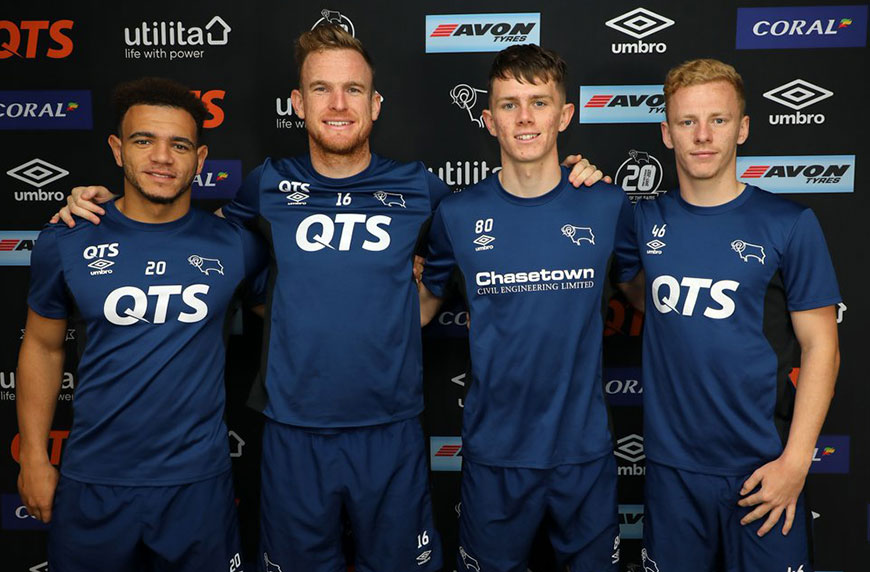 Derby County have handed first-year apprentice Max Bird his first professional contract, keeping him at the club until at least 2020.

Academy graduates Mason Bennett and Callum Guy have also committed their futures to the Rams after both penned new three-year deals.

Bird only turned 17 earlier this week and has already made his first-team debut having started in Derby’s 3-2 defeat against Barnsley in the EFL Cup last week.

The young midfielder was first introduced to the Under-23 side in January and featured 31 times for the Under-18 and 23 teams last season prior to starting his apprenticeship.

“We know what potential he has got,” manager Gary Rowett told the club website. “He did really well against Barnsley.

“We feel, physically for the Championship, that he is little off where we need him to be, but he has only just turned 17 and you are not going to get those elements straight away.

“What he has shown is that he has got the mentality and the capability to cope with the pressure of having the ball.

“I see him, as does the Academy, as someone who has got a big future ahead of him at the club.”

Bennett has enjoyed a high-profile career to date since making his senior debut as a 15-year-old against Middlesbrough in October 2011 but is still yet to become a permanent fixture in the Rams first-team.

The January 2013 LFE Apprentice of the Month has amassed just 39 appearances and three goals in six years since first being introduced to professional football and has been sent out on loan spells at Chesterfield, Bradford City and Burton Albion in the past.

However, the 21-year-old, who was named LFE Championship Apprentice of the Year in 2014, has worked his way back into the first-team fold with three appearances this season and netted his first goal for the club since September 2013 in the EFL Cup encounter with the Tykes.

“With Mason, I have been pleased with his development and he is someone that I have spoken about a lot recently about what he needs to do to get into the team,” Rowett said.

“He’s been in and around it and I think he is having a strong season compared to the last two or three.”

Meanwhile, midfielder Callum Guy has been rewarded having been a stalwart in the Under-23 side, amassing 65 appearances over the past three years, including 20 as a second-year apprentice during the 2014-15 campaign.

The 20-year-old featured in three EFL Trophy fixtures for the Rams Under-23s last season before spending time on loan at League One club Port Vale, where he started 10 of his 11 outings before suffering a hamstring injury in March that ruled him out for the rest of the season.

Guy returned to full fitness over the summer and was handed his senior debut for County as he replaced Bird against Barnsley for a nine-minute cameo.

Rowett added: “Callum Guy is undergoing a different time at the moment because he has been out for five months and has been rushed back and thrust into the action when he is not quite ready.

“I think it will be a while before we see the best of him, but he showed at Port Vale in League One that he can certainly challenge for a place in our squad.”

The trio were joined in pledging their future to the club by experienced defender Alex Pearce, who signed a one-year extension to his existing deal, while Wales international Joe Ledley arrived on a free transfer.