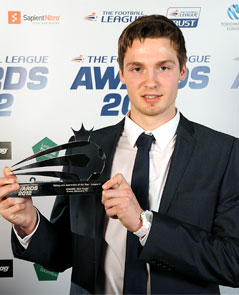 Crewe Alexandra’s Nick Powell has been named the Kitbag.com Apprentice of the Year for League Two at the Football League Awards 2012.

Powell received the Award at the gala ceremony at The Brewery, London, on Sunday evening in front of over 600 guests from Clubs, sponsors and the football industry.

This year there were a total of 17 Awards with 32 Clubs shortlisted for honours.

Nick has been a part of the Crewe Alexandra set up since the age of six, progressing through the Academy to make his first team debut at the age of 16.

Alongside representing England at age group level, the attacking midfielder has continued his commitment to his studies at Reaseheath College and is working towards extra units for higher grades.

On winning his award, Powell said:

“It is great to get this award, it shows that Crewe do everything to help youngsters in their education as well as their football.”

“I would like to say a special thank you to my College teacher, he has really pushed me this year while I am studying for my A-Levels. I am trying to get the highest grades I can and to also score as many goals as I can to help Crewe reach the Play-Offs.”

The Kitbag.com Apprentice of the Year for the Championship Award was won by Coventry City’s Gael Bigirimana, while the League 1 Award went to Charlton Athletic’s Jordan Cousins.

When assessing the Apprentice of the Year category, judges looked at the playing record of the Apprentice’s educational attainment, disciplinary record and other outstanding achievements.

Players eligible for this award are those in the second year of their Apprenticeship (i.e. in his ‘under-18’ year and registered as either a second year scholar or as a first year professional).

To find out more about The Football League Awards, and for a full list of Award categories, please visit www.FLAwards.com.