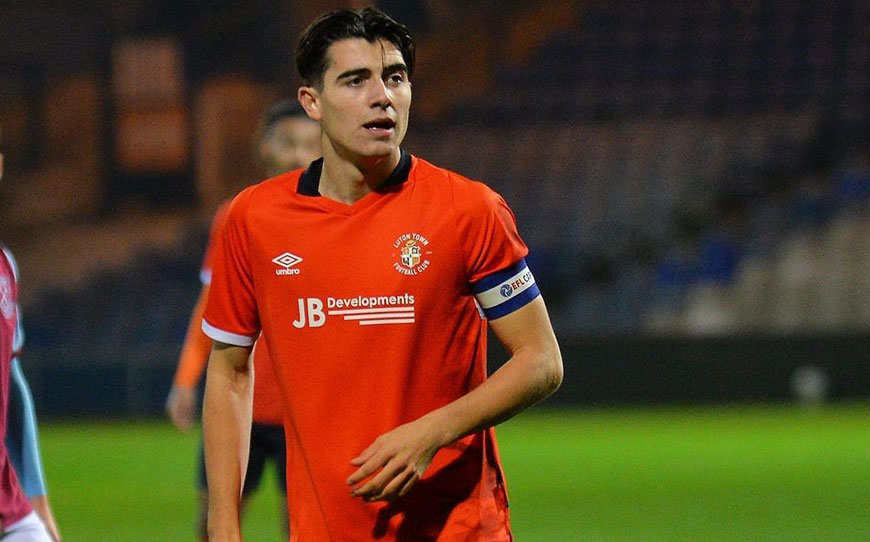 As a schoolboy, Casey Pettit began his journey in academy football at his beloved West Ham United before moving on to bitter rivals Millwall, but was left without a scholarship offer in 2019.

Not to be deterred, he continued to pursue his dream and quickly caught the attention of Luton Town, who jumped at the chance to recruit the promising midfielder following a two-week trial.

Since then, the 18-year-old has proved to be an all-round high achiever, captaining the Under-18s and Under-21s sides, alongside exceeding his target grades with a DDD* profile on the BTEC Extended Diploma and finishing the Sporting Excellence Professional (SEP) programme.

“I joined Luton at the back end of the Under-16 season, and I’ve loved every minute of being here,” Pettit told LFE.

From day one, I’ve tried to separate myself from the rest of the group by being more than just a footballer.

“There’s the playing side, where obviously I want to be a leader on the pitch, but it’s also important to set the standard off the pitch, whether that’s in the classroom or wider activities. Doing that maximises my own development and then also encourages the rest of the lads to push themselves, so we can all improve as a unit.

“I always had in my mind when working on the BTEC or SEP, ‘how can I relate this to my football’? There’s a lot of information on the BTEC that you can absorb and then use to improve your own performance. In the SEP, you’re analysing your clips, identifying strengths and weaknesses and setting targets, so it keeps you on track and self-aware of your development.”

In addition to his classroom commitments, Pettit, who penned a professional contract at the completion of his apprenticeship in July, has utilised his spare time to initiate a second career pathway.

The multifaceted teenager runs his own coaching company away from the Sky Bet Championship club, working with individuals and teams, and is currently studying for his UEFA B Coaching qualification, remaining on course to become one of the youngest people to attain it.

He said: “Football won’t last forever, even if you do get a professional contract and have a good career in the game, so it takes the pressure off me now, knowing I’ve got qualifications under my belt.

“When we did the Level 2 badge as part of the education programme, I never had it in my mind that I wanted to be a coach, but while I was doing the course, I found that I really enjoyed it and decided to move on to the UEFA B licence.

“I set up my own coaching business to keep developing my skills and get a bit of extra income. I started with one-to-ones, working mainly with Under-13 to Under-15 age groups, and I’ve got about 10 boys and one or two girls that I work with now. I also coach four teams, which range from Under-12s to Under-14s.

The apprenticeship offers different opportunities and pathways, and coaching is one that I’ve discovered a real passion for.”

Pettit has received loyal support from his growing clientele, with some travelling from Luton to his local field in Essex. And despite his playing progress, the first-year professional is keen to continue his coaching project, which he insists is aiding his football development.

“I take it as a huge compliment that they’re willing to go that far to receive coaching from me,” he added. “The relationships I’ve built with the parents and their kids are too strong to let go of. Having put so much work into developing these players, it’d be a shame to just leave that now.

“Playing is my number one priority, but you also need a distraction and a release to keep your mind refreshed, and I’ve found that coaching can actually enhance my performance on the pitch.

“As a captain, you need to be a good communicator and build solid relationships with the coaches and players. You’ve got to be approachable and trustworthy, and you need to be willing to set standards and be an example for everyone to follow. Coaching has helped me develop those attributes.

“When I’m working with teams, I’m seeing the game from a different perspective and it’s improving my tactical knowledge. I can also understand my coaches better and what they’re asking of us in certain sessions and drills.

“It’s important to consider, can you add something else into your routine that relieves the pressure from football for a while, can you invest time into an interest that can also give you transferable skills and help you improve as a player, and can you work on something that can act as preparation for life after playing?”

The Hatters starlet continues to be a shining example to his peers outside of football as well, having raised money for a range of local and national causes, including Prostate Cancer UK and the NHS.

“My number one aim as a footballer is to become a role model,” Pettit continued. “I want people to look up to me for the right reasons. Seeing players like Jordan Henderson and Marcus Rashford inspiring people for their work off the pitch motivates me to replicate what they’re doing and keep helping causes that I believe in.

“My dad was diagnosed with prostate cancer in 2012, and thanks to the support and treatment of Prostate Cancer UK, he’s still here today. I’ve always wanted to repay the charity for everything they did for him, so I feel strongly about making my mark and helping people.

“When I was younger, I was a big West Ham fan and went to a lot of the games, so after the final whistle, I’d go down to the players’ car park and take a shirt or a ball or something like that, and just get the players to sign them. Then, I’d auction those items off for charity.

“Isla’s Fight is another cause that I’ve raised money for, in support of a little girl who has a rare type of child cancer. We tend to take being healthy for granted and it’s important to recognise people’s struggle.

“More recently, it’s been a time to show appreciation to key workers that have been trying to save lives throughout the pandemic. I felt it was only right that I made a contribution to show my gratitude to them, so I decided to auction a few things off and donate the proceeds to the NHS.

“I still feel like I can do a lot more and part of the motivation to keep progressing in football is that I can gain a larger following and raise more funds for those in need.”