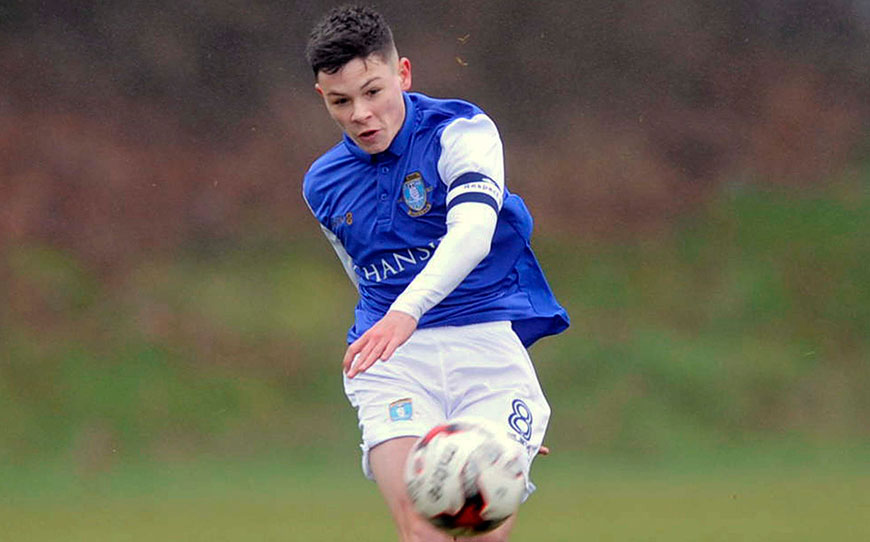 It has been a special start to 2018 for second-year apprentice Alex Hunt.

The Sheffield Wednesday fan joined his boyhood club at the age of seven in the hope of one day representing the first-team. A decade later, Hunt is on the verge of turning that dream into a reality having signed his first professional contract, keeping him at Hillsborough until the summer of 2020.

The 17-year-old has established himself as an influential member of the Under-18s side, nearing double figures in front of goal this season, including a terrific free-kick to inspire the Owls to a 3-1 win against bitter rivals Sheffield United in January.

The midfielder credits his impressive displays to a willingness to make vital sacrifices, which have earned him a promotion into the Under-23s, as well as the chance to train with the senior squad in recent weeks since the appointment of manager Jos Luhukay.

“I’ve been coming in working hard every day since I started my apprenticeship,” Hunt told LFE. “I’ve had to forget about what my mates are doing on a weekend and get my head down in order to ultimately become a professional footballer and hopefully get in that first-team.

“You’ve still got to have friends and switch off from football and you make friends at the club as well that you obviously have a relationship with off the pitch, but you’ve got to do things that won’t negatively affect your career.

“You’ve got to sacrifice those Friday nights out and make sure you eat the right things all the time because you’ve got games at the weekend. You’ve just got to try to be as professional as you can and I’ve tried to do that by knuckling down, staying behind and doing extra work in training and just making those sacrifices that are necessary to make it to the top.”

Hunt’s success has not been limited to the playing aspect of the apprenticeship, excelling in the classroom by completing his NVQ and FA Level 2 Coaching qualification, as well as staying on track to achieve D*D*D* on the Extended Diploma, leading to a selection in LFE’s ‘The 11’ and a nomination for the LFE Championship Apprentice of the Year, which celebrate outstanding performance as a player and student.

“I just try to do my best, whether that’s on or off the pitch,” he continued. “I’ve tried to get my education completed as quickly as possible and get the best grades that I can. It just takes the weight off your shoulders by taking the focus off football.

“I didn’t just want to do the bare minimum, I want to do as much as possible to become a professional footballer and I think working hard off the pitch sets the tone to work hard on it as well.

“You’ve also got to think about after football and be honest with yourself that it’s not going to last forever. The Extended Diploma gives you more qualifications, which is obviously very important to have and can hopefully open up a lot of opportunities in the future.”

Hunt’s desire to be a leader came to the fore during the Christmas period when the youth team captain organised the group to take part in a ‘Cash for Kids’ charity bag packing day, raising close to £500 in an afternoon.

He said: “You see the first-team going into Bluebell Wood Hospice and St Luke’s Hospice and give their time to kids who are less fortunate and I don’t see why we can’t do that either, so we organised a day raising money for Cash for Kids.

“It’s just a nice thing for the team to do, to get the group together and push people maybe a bit out of their comfort zone as well, which will hopefully build their character as well as obviously helping to fundraise for the charity.”

To cap off an incredible period of success, the Sheffield-born teenager won LFE’s Goal of the Month award for January thanks to a long-range screamer in an 8-0 win against Hull City, receiving significant support from the Wednesday faithful to claim 52 per cent of the votes.

Hunt added: “I’ve done a few in training like that but never had the audacity to try it in a game so I just thought ‘we’re a few goals up, I’m going to hit this’ and luckily I struck it sweetly and it went in the top corner.

“Sheffield Wednesday is a massive club and we’ve got loads of fans who are very passionate about the team and for the website to put it online and the fans to see it and show their support to me means a lot, particularly being a Wednesday fan myself.”