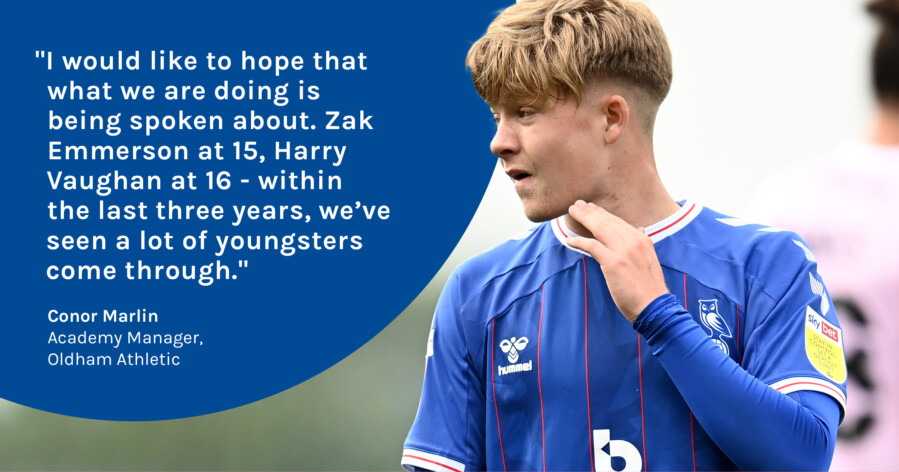 This season, six youngsters have put pen to paper on their first professional contracts, while three apprentices have made their first-team debuts.

Those deals, along with Couto, Trey Turner and Isaac Modi’s debuts, shine a light on the hard work that is happening behind the scenes at Boundary Park, from Head of Academy Conor Marlin to Phil Arbelo-Dolan, who heads up the education within the academy.

The League Two club currently sit just one place above the base of the football league pyramid and have recently reappointed former Latics player and manager John Sheridan as Head Coach to, hopefully, turn their season around. While results haven’t necessarily gone their way over the course of the season, Sheridan has initiated an upturn in form and the battle against relegation is well and truly on. Away from that, it is the opportunities presented to youth stars such as Couto and Vaughan that has been a huge positive for Latics fans and everyone associated with the academy. It is a testament to not only the recent interim boss Selim Benachour and former managers Keith Curle and Harry Kewell for placing their faith in young players, but also the quality being produced from under-9s to under-18s.

Arbelo-Dolan shared his delight at seeing the progression of the academy players, some of which have progressed through the age groups:

“As an academy, we are extremely proud. To watch the likes of Harry [Vaughan] come through under Harry Kewell and establish himself in the first team has been superb. Keith Curle came in and gave the youth a chance, which, again, for us involved in the academy is brilliant.

“Benny [Couto] has taken his chance at wing-back and made the position his own. Trey Turner has recently made his debut, along with Isaac Modi. We’ve had both apprentice keepers on the bench and on some days had five academy players involved in the matchday squad. At League Two level I think that is unheard of.

“There has been a real progression in how many players we are getting through. That is what pleases us most. Last year we had four players turn pro. The year before that we had zero, so you can see that something has changed and there is now an investment in the future.

“Being an Oldham Athletic fan, as well as the Head of Education, it is great to see.”

Managing the educational side of the LFE apprenticeship programme falls under Arbelo-Dolan’s remit, which requires meticulous planning and an enhanced understanding when his learners are advancing into a first-team environment.

Introducing the new SEP programme, maintaining high BTEC grades and engaging in local community initiatives are just a few of the challenges he faces, but he has been pleased with how the group has adapted.

“It’s difficult because the educational side of things has changed immensely,” Arbelo-Dolan says.

“Now that a lot of them are involved with the first team, they are doing a lot of travelling, training commitments have increased and there is more pressure on them to perform on the pitch. They might have an away game on a Tuesday and then be back in for education on a Wednesday.

“To cater for those demands we have had to change our education sessions to work around the players who are involved with the first team.

“The way they have dealt with it has been great and we are confident that we will get them all through both the BTEC and SEP programmes.”

It isn’t unusual to see so many talented teens in a Latics first team. In fact, the supporters will have grown accustomed to the club’s best youngsters being given opportunities on the big stage, with many academy graduates making a name for themselves.

EFL enthusiasts will remember George Edmundson’s gradual rise from youth level to first-team football and how seamless the transition appeared. Having earned the trust of manager Darren Kelly, the defender debuted against Shrewsbury Town in the Football League Trophy and went on to make a further 78 appearances before Scottish powerhouse Rangers FC snapped him up for an undisclosed fee. In 2019, forward Zak Emmerson played three games while only 15 years old, before moving to Premier League outfit Brighton & Hove Albion a year later. Chelsea successfully tempted Danny Philliskirk into a move to Cobham, Tom Eaves was bought by Bolton Wanderers after 15 senior appearances, and Joel Coleman moved up to the Championship with Huddersfield Town following his impressive breakthrough season in 2015.

For Marlin, who joined the Latics academy almost six years ago from the Irish Football Association, his work as Head of Academy is heavily based around player development, quality of coaching and ensuring that the day-to-day operations within the academy are running as smoothly as possible, while also working with the first-team manager to ensure there is a clear pathway for the young gems.

Since stepping into his current role at the beginning of the season, Oldham have not only started to produce talent good enough for League Two level but who are also attracting attention from clubs higher up the pyramid.

“Everybody needs an opportunity. Without that, you will never know how good a player can be,” Marlin says. “The youngsters have certainly stepped up to the plate and it’s exciting to know that there are more coming up behind them. Their debuts and professional contracts should inspire everyone else in the academy.

By building a reputation for giving young players opportunities, Marlin is hoping it can help from a recruitment standpoint:

“I would like to hope that what we are doing is being spoken about. Zak Emmerson at 15, Harry Vaughan at 16 – within the last three years, we’ve seen a lot of youngsters come through.

“We try to play the right way and we are a place of opportunity, so, hopefully, players want to come here.”

What most don’t see is the work that goes into developing the psychological aspects of young footballers to ensure they are equipped with the tools to cope inside such a high-pressured environment. Through a unique personal development programme, LFE work with apprentices around the country to enhance their understanding in areas such as identity, performance, wellbeing and transition. And throughout the 2021/22 campaign, former professional footballer and mentor Mark Roberts has been working closely with Oldham Athletics’ youth team, passing on his extensive knowledge and experience in the industry, and delving into the challenges young players may face along the way.

“I have enjoyed working with the group this year. Stepping up into the first team environment presents a fantastic opportunity for these individuals, but it can also be a difficult transition and a real challenge for young players,” Roberts explains. “An area we look at in our personal development sessions is how sometimes transitions can be positive, where we step out of our comfort zone and we thrive, but sometimes those transitions don’t work out how we want them to. Players might find themselves having to take a step back and drop back down to the youth team. The question we ask is ‘how is that going to affect us as an individual?’

“Sometimes those circumstances are out of your control. There might be three or four players playing in your position, or the player you replaced is back from injury. In a first-team environment, a lot is going on, so often those things aren’t explained. The work that I do acts as a support mechanism in the difficult times, as well as the good ones.”