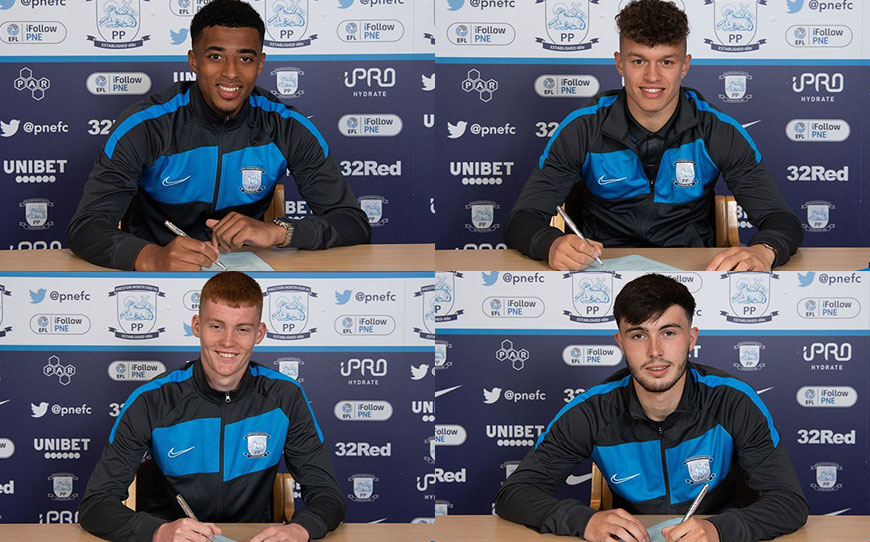 Preston North End have awarded four professional contracts to their academy youngsters, with Lewis Coulton, Jacob Holland-Wilkinson, Oliver Lombard and Joe Rodwell-Grant all agreeing one-year deals, with the option of a further 12 months.

None of the quartet have featured for the first team yet, although Holland-Wilkinson has been an unused substitute on many occasions, while Coulton and Rodwell-Grant have been included in the matchday 20.

North End Scholar of the Year Holland-Wilkinson told the club website: “It has been a dream year. I have been given a lot of opportunities and it has been a blessing this year. I have still had time to play for the youth team, as well as coming up to Euxton; it is something I have thoroughly enjoyed.

“I have wanted to thank Alex Neil for a long time, because he was the one who put his faith in me to come up and deliver with the first team and now, I just need to work hard, continue to progress and hopefully get a chance next year.

“Nick (Harrison) and everyone at youth development, even down to the coaches at the younger age groups, from Under-14s when I came in, they have all been great with me, all shown me support and now I can say ‘thank you’ and try and show what I can do.

“I will be putting 100% in over the summer. Everyone will see it as a nice little break, but for me it is a time to work hard and come back in and hopefully smash next season.”

Striker Rodwell-Grant said: “It has been a long journey. I have been at the club since I was 11-years-old and I have worked my way through. I have been here about seven years and I have now earned a professional contract and I am over the moon with it.

“I have envisioned myself earning a professional contract since I was little, especially at Preston North End, because I support the club. It is my hometown and I put the hard work in and now I have got here, but I need to reach new levels.

“All my mates are Preston fans, my dad is, all my family and siblings are, so it means a lot to me to get my professional contract. All the way through school, all the lads have talked to me about this and it is just a dream come true.

The 18-year-old gained experience of men’s football at Chorley and Bamber Bridge this season, which he believes has helped him take the next step in his development.

“When I was at Chorley, it was intense and we needed to win, especially in the FA Cup, when I came on against York for 30 minutes. That was a really good experience, which you don’t really get in 18s football.

“Coming back down to the Under-18s was really good, because I could bring things I had learned from the men’s football down to youth team football and I really benefitted from that.

“I have had a really good season, but now is the time to get my head down and work really hard and try and catch the manager’s eye when I get back into pre-season.”

Scotland youth international Coulton said: “I have been a scholar for two years, but I have been at the club since I was 11-years-old and it started from there. You have to train hard and work hard every day and that’s how you get to here.

“It has taken a lot of hard work and I have to thank the coaches that have been at the club, they have helped me throughout and that’s how you get the opportunity.

“They are a top set of coaches. From Under-11s through to Under-16s, you have a different coach every year and then for the last two years I have had the same coaches and I can’t thank them enough. As an individual and as a team, you learn different things every day, which has helped me.

“Four of us is quite a lot. Last year there was only Ethan Walker, so for four of us it really helps; you have lads your age you can speak to. The older lads are great and they speak to you, but to have players your age, it makes you feel a bit more comfortable.

“A few of us have been involved in matchday squads this year and that is a big help. It means we have been around the lads already and you know what it is like. I already know the structure of things, which really helps.

“I want to hit the ground running in July. It is not really a time to be off, we still have to work hard and carry on working – it won’t really stop for me, I just have to carry on with my individual plan.”

Meanwhile, goalkeeper Lombard added: “Hopefully I can get in the gym and put a bit of weight on – it will help me develop in men’s football and that can be one of the main things for me. The work starts again now. It is a year’s contract and I have to work hard this year and try and get myself another one.

“This is 100% what you work towards as a young player. It has come and now I need to keep on working hard and keep on getting better and hopefully improving, so that in the future I can challenge for a place in the first team.

“The coaches do a lot for you. They do a lot every day, planning sessions; they are there a lot earlier than us and they have helped me come on, as a person as well, bringing the social side to it, as well as football.

“The last year has been hard. There was a lot of running in pre-season and less football, with only one session a day this year, so it was hard. But it has come to this point now and it is rewarding to have put the hours in and earn that professional contract.”