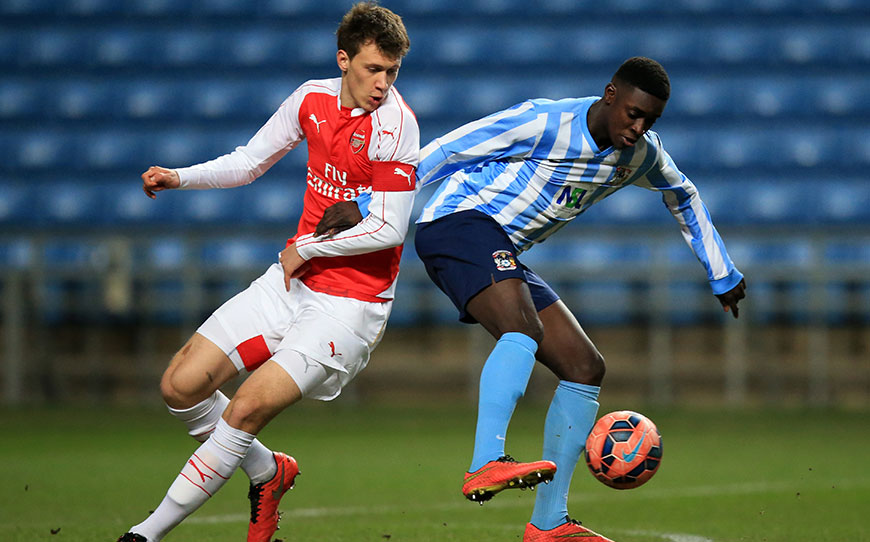 Coventry City boss Tony Mowbray has admitted that he is resigned to losing the services of second year apprentice Bassala Sambou but is hopeful that five of the Sky Blues other Under-18s players will sign professional deals.

Sambou, who has scored 25 goals this season is regarded as one of the club’s brightest prospects but has turned down the offer of a professional contract despite being told that there is a pathway for him to the club’s first team.

The 18-year-old is thought to be attracting the interest of a Premier League club and Mowbray is now resigned to getting the best possible compensation deal for the player when he leaves this summer.

He said, “I like Bassala – he’s actually quite a humble young guy and yet we find ourselves in a situation where it has been indicated to us by his advisors that he’s probably not going to sign a new contract.

“Bass had a pretty good youth cup this year, scored some goals and caught some interest. Bigger clubs than Coventry City look for young English players with potential and the way the game is at the moment there’s an opportunity between scholarship and first year professionals to go and jump ship.

?? “The only protection we would have is compensation so if anyone wanted to take him there would be issues because of his training over the last six or seven years, whatever it is, I think he came to us aged 11.??

“It’s frustrating because I think the career path would have been good for him here. Can he see a way into the first team here at Coventry? He should be able to.

“I know he was a bit concerned, or his advisors were using it really, saying why isn’t he in the first team now. And as the manager I am telling him he’s not ready.

“He’s a boy who has lots to learn about where to run, when to run and how to get physically strong enough. It’s OK scoring goals for the 18s in the youth cup but it’s a big jump from the 18s to the Under-21s and it’s not as if he’s scored bags of goals in the 21s, let alone the jump to the first team.

“So it’s a bit of impatience, I think, but it’s out of our hands. They have intimated that they are not going to look to re-engage. We have made them a more than fair offer, I would have to say, because we recognise his talent.”

“I have had a long chat with both his advisors and him about his career path, hopefully to our first team, and yet it’s been intimated that he’s not going to sign.”

Mowbray is more hopeful that the club can secure the services of five other second year apprentices who have been offered professional contracts – but conceded that some are haggling for better terms.

“To put it into context we’re in a different world to even a few years ago when players would just be delighted to get a contract offer because otherwise they’d have to go and find a real job in the real world,” Mowbray added.

“Every young player seems to have an agent these days and every agent seems to have to show that they are doing something, show their worth by saying, ‘this is what this club pay their first-year pros.’

“We’re saying that this is what we can afford in our budget and we’re giving you an opportunity to be a footballer. We’re not sure they’ll get in and around the first team but you look to protect your assets and then it’s down to their footballing ability.”

“Some are happy to sign, the ones whose parents have got involved rather than their agents and say ‘yes, little Jimmy is delighted with his contract offer and is going to work as hard as he can to try to get around your team and show he’s worthy of it.’

“Others want more money, want this, want that, but hopefully over the next few weeks all of them will agree to their deals.

“There’s a bit of to’ing and fro’ing but my advice to them all is just give yourself the chance to be a footballer because at 17/18 you are just a young lad looking for where you are in life; probably got yourself your first girlfriend, been on holiday for the first time without your mam and dad, just getting a car.

“Give yourself the chance to be a footballer, don’t go chasing a few extra hundred quid now when all you need to do is focus on being a better player.

“That’s my advice, always has been and always will be. And then the talent takes them to where it should be. This club will pay them what we can pay them to keep them here but if they outgrow the club by being the best player in the first team every week someone will come along and offer you money for them.

“Then, invariably, you can’t keep them because they are being offered ten, 20, 30 times what we can. So we wouldn’t stand in their way, we’d do the right deal.”