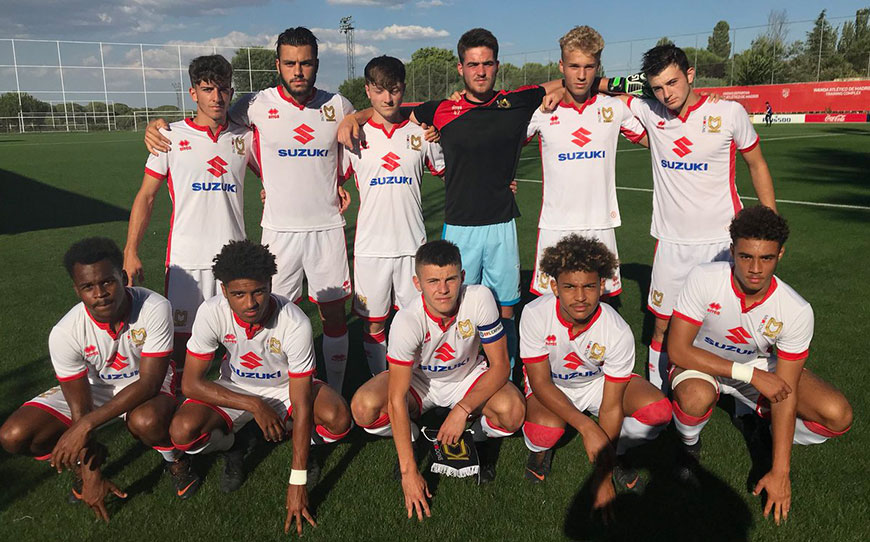 MK Dons got no reward for a battling performance against an excellent Atlético Madrid side, who showed how high the standard is to succeed at one of Europe’s elite clubs.

The Dons trailed 3-0 at the break due to two ferocious shots and a fluke goal but that reflected the difference between the sides after Atlético had sniffed out a lively start by the visitors.

Atleti clearly had a shoot on sight policy which, after a series of long range efforts brought corners, went ahead on 19 minutes when the terrific centre forward Tenas rifled home a low shot from 25 yards out. Five minutes later it was 2-0 when leftback Exposito crossed from deep on the left and was faintly embarrasses to see the ball drift into the net over Dons busy keeper Alfie Jones.

Straight after a drinks break playmaker Soto fired in a superb free kick from 30 yards into the top corner after a harsh decision by the referee. It could have been more than 3-0 as Rojas hit the bar with a thunderous drive from way outside the box and saw the rebound kneed over the bar.

Dons’ Spanish boss Edu Rubio brought on big defender Jamal Sule and Under-16 Jack Davies and changed the formation at halftime, going to three at the back which became five when required. All of these changes had a positive effect as MK went from making an effort to effecting the game. Atleti, with 16 year old Soriano at the heart of most of their best play, continued to look dangerous but battling MK turned the tide at times and had a spell on top.

After a flurry of substitutions, Jenson Wright shot well wide before Jones made a fine save, tipping yet another long range drive over the bar from Lasarda.

Atleti got two in a minute with five minutes left, Montero tucking home a rebound after a header came back off the bar, then Nacho moving impressively down the right and crossing for Nando to make it 5-0.

That probably reflected the game but did not tell the story of a determined effort, especially after the break, by the Dons against a top class opponent.