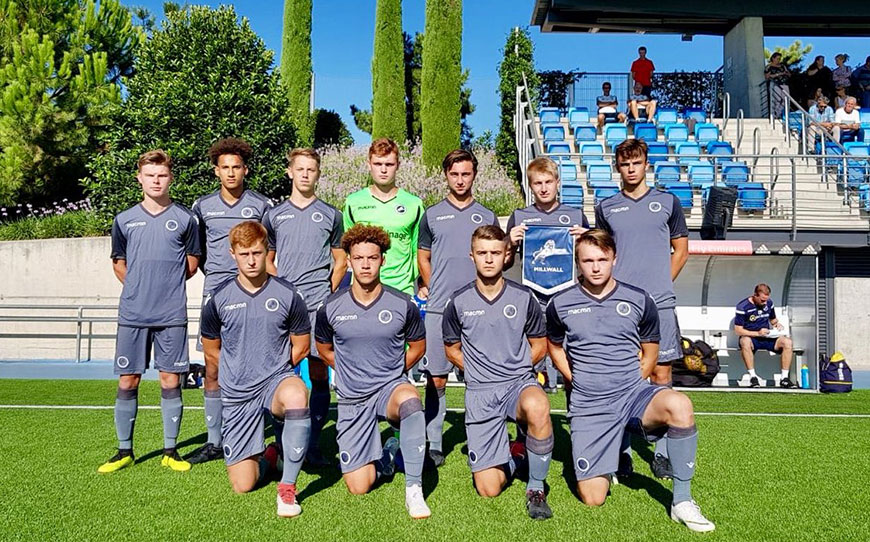 Millwall were taught a football lesson by an awesome Real Madrid side who perfected every area of the game in a tiring examination for Chris Perry’s team. With youth internationals from Spain, Brazil and France in their ranks, Madrid were a class above any opposition Millwall had ever faced before.

Real started predictably well, looking dangerous with every attack, especially skipper Jorge Martin down the right who provided leftback Lewis West with a major challenge all half.

There was an early chance for Millwall on three minutes when midfielder Sam Skeffington fired in a tremendous long range shot that Madrid keeper Toni Fuidias could not hold but George Alexander was unable to get to the rebound.

Seconds later Real went ahead when a wonderful through ball sliced open the Lions defence and France u16 international Theo Zidane, son of Real legend Zinedine, slid it past Lions keeps Joe Wright.

Real had a second goal disallowed for offside when striker Juan Miguel Latasha tapped home after Wright had parried a sharp drive, but after several close shaves, including Wright tipping a shot over the bar, on 34 minutes, Real finally doubled their lead. Latasa slid a neat pass through the defence where captain Martin came off the right wing to finish neatly with his left foot.

It was 3-0 on 43 minutes, this time a goal which Millwall could have avoided, a self inflicted wound. West received a goal kick from Wright, lost possession to Sergio Arribas as Real’s exemplary high press paid dividends, Carlos Dotor tapping home past the exposed Wright. It was a scoreline that reflected a one sided half in which Real’s movement, speed, forward approach and passing was a joy to behold – unless you were a Millwall player.

The young Lions might have been relieved to see Real withdraw five of their attacking players at half time, but their young replacements took up the offensive baton.

Just three minutes after the restart, Millwall were caught out playing the ball out of defence again, Sub Pablo Rodriguez knocking in from a neat head down by his strike partner to make it 4-0.

With Sean O’Brien coming on up front to hold the ball up and give Millwall more of an outlet, the Lions calmed the game down, only for two goals in seven minutes to give the game a scoreline reflective of Madrid’s dominance.

On 70 minutes, the referee gave a very harsh free kick against the Bermondsey boys for handball when a shot was struck at a defender from close range. There was no doubting the quality of the goal though, halftime sub Amis García curling a fabulous left foot shot round the outside of the wall and inside the post from 20 yards out.

The sixth came again from overplay in and around the Millwall box, Pablo Rodriguez pouncing to snare his second goal amid a crowded area. There were opportunities for further goals but Wright and his exhausted defence held out to keep the score down.

“That was as good a performance by any Under-18 team I’ve ever seen,” Lions academy manager Scott Fitzgerald told LFE. “It was a pleasure to watch Madrid and it was excellent for our boys to see what goes into making a world class player. As good as their passing and movement was, off the ball their work rate and defensive effort was outstanding. It was a lesson for us all.”