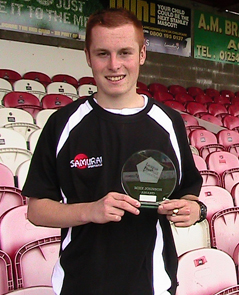 Former Accrington Stanley Apprentice Ryan Hopper has been named as the winner of the Mike Johnson Memorial Award.

Hopper who made four first-team appearances for Stanley was also LFE’s Apprentice of the Month in March.

He made four appearances for Stanley’s first-team last term and signed a one-year deal at the Crown Ground in May.

However this award recognises his contribution off the pitch and in particular on the NVQ Level 3 Diploma in Achieving Excellence in Sports Performance.

“Ryan was the best portfolio that was submitted to us,” said Lead Internal Verifier, Mairi Glynn.

“He provided lots of detail in his work on the NVQ and showed an excellent level of knowledge and understanding.”

Hopper who received an engraved glass trophy and cheque for £250 as his prize is understandably delighted;

“I was really pleased when I was told I’d won this prestigious award,” said Hopper.

“Hours and hours of hard-work go into the NVQ so it’s nice to know that my going that extra yard my efforts have been recognised.”

While Hopper is pleased by his newest addition to the mantelpiece at home, his joy was tempered last month when he left Stanley.

Having signed a one-year deal in the summer Hopper had been sent out to Blue Square North side Droylsden in August to gain valuable experience on loan.

However after being called back to the Accrington in October he was told by then manager Paul Cook that he no longer figured in his plans for the season.

“It was quite a shock really,” said Hopper.

“It’s difficult to understand because the same manager gave me a contract in May. He (Cook) said that he’d signed some experienced players and that I wouldn’t get much of a chance to play. There’s no reserve team at Accrington so we sat down and had a chat and agreed that it would be for the best if I moved on.”

Cook left the Crown Ground last week after agreeing a deal to take over at Chesterfield and while Hopper had a good relationship with new boss Leam Richardson, he is not expecting a call to invite him back to East Lancashire.

“I’m training up at Morecambe at the minute and just seeing how that goes,” said Hopper.

“There’s no pressure from either side at the moment (in terms of a deal) and they’ve been really good with me. They’ve got some good players and for me it’s about going somewhere that I feel I’ve got a chance of playing. I had a taste of League football last season and I want more of it.”