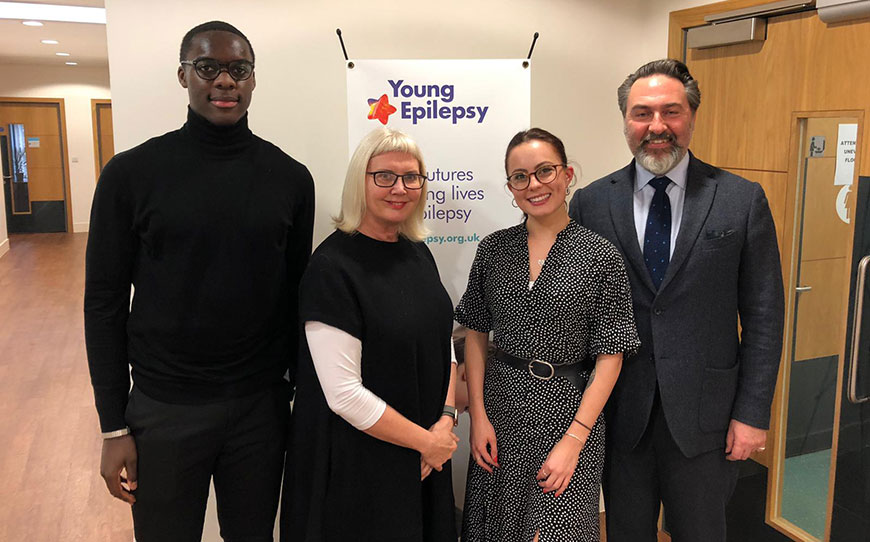 When Renell McKenzie-Lyle started his apprenticeship at Barnet in 2017, it seemed like he was destined for success.

The young goalkeeper quickly found himself on the first-team bench for games against AFC Wimbledon and Swindon Town, with a senior debut feeling like a realistic expectation.

However, he was dealt a cruel blow just days after his 18th birthday that would ultimately scupper his progress with the Bees.

Having suffered multiple seizures, McKenzie-Lyle was diagnosed with epilepsy, which limited his availability on the pitch and eventually led to his release.

He told LFE: “I was trying on clothes in front of the mirror and the next thing I remember, I woke up and there were two paramedics standing over me and my brother beside them looking really confused. I was just on the bathroom floor with an oxygen mask on. It was so scary.

“I had to get a CT scan and they found that something was there, so I went for an MRI scan and they told me they’d found a benign tumour in my brain, which was causing me to have tonic clonic seizures.

“My first thought was that I’m not going to be able to play football again. I felt like my life had come to a complete stop. It probably sounds dramatic, but at the time, I just thought everything was over.

“Physically, it takes a lot out of you when you have a seizure. You can’t really do much for a few days afterwards. Mentally, I think it makes you feel a bit different from everybody else. You feel like you’re carrying this thing that nobody really knows about, because being epileptic is invisible.”

In need of professional support, McKenzie-Lyle turned to Young Epilepsy, the UK’s only charity dedicated to creating better lives for children and young adults with epilepsy and related conditions.

“The club weren’t really sure how to deal with it because you don’t come across many people in football with epilepsy, so that was where the charity came in,” he said. “My support worker, Alex, came in to speak to the players and did a session with the staff to inform them about epilepsy.

“After I came out of hospital, I felt very low for a while. I felt helpless and I was just sleeping a lot, so I used Young Epilepsy as a support network. I needed to be educated on it and also needed some emotional support.

“I was introduced to Leon Legge, who is a professional footballer and also has epilepsy. I was able to speak to him on the phone and that really gave me the drive to still pursue my football. Speaking to him just showed that it’s possible to continue your career and make things work, even with epilepsy.”

Inspired by his conversation with Port Vale captain Legge, the 20-year-old decided to increase his involvement with Young Epilepsy, raising awareness and providing support as a Young Ambassador.

“I wanted to do more to help others, so I started off by talking at an event,” said McKenzie-Lyle. “Afterwards, I received positive reviews from people, saying they were really inspired by my story and liked my presentation.

“From there, Young Epilepsy asked me to be the face for their Christmas campaign and then I did an interview for ITV’s lunchtime news. Shortly after that, I became a Young Rep and a Young Trustee, so I now have a bigger voice for young people and adults with epilepsy. It’s been a crazy experience to go from using them as a support network, to now working for them and helping other people.

Going through the whole battle with epilepsy really has helped me to develop as a person. I didn’t think I was strong enough, but I just had to be resilient, keep my head up and maintain belief that everything would be okay.

“It’s quite surreal for people to be inspired by my journey with epilepsy. It feels amazing to be able to help other people who can relate to my story and I’m glad I can show them some positivity.”

Informative blogs, advice videos and even an interview with Jamie Redknapp are also on McKenzie-Lyle’s list of accomplishments as he aims to spread knowledge of the condition, which affects 112,000 people under the age of 25 in the UK.

He added: “One thing I’m really keen to do is go into different clubs and teach staff and players about the topic, because it’s not something we learn about in first aid courses and it’s something that we don’t need to be scared of. Epilepsy is fairly common and it’s not the end of the world if you are diagnosed.

“There are a lot of handy tips that I’ve learned and I think it’s important to pass on that advice to others. You do really have to plan things properly and that is one thing that can sometimes get you down. If I want to go out at night or meet friends, I’ve got to make sure my schedule is right.

“I need to get plenty of sleep, take my tablets on time and I don’t really drink alcohol. I work with my neurologist and listen to his advice about my tablets and what I should and shouldn’t do. Once we found the right balance for my medication, I’ve been able to avoid having seizures.

“Many people have experienced rising cases during lockdown due to feelings of stress and not being able to go out and meet friends and family. To combat that, I’ve been doing a lot of reading and meditation, I’ve been on plenty of walks and have just generally tried a lot of things to keep my brain active.”

Now nearly 18 months seizure free, McKenzie-Lyle is determined to get back to full fitness and rise back up the leagues, alongside expanding his ambassadorial duties at Young Epilepsy.

“I’m currently at Hayes & Yeading United,” he said. “Epilepsy definitely set me back, but it’s just an obstacle that I’m overcoming and I’m focused on moving forward now and seeing how far I can go.

“For anyone that may go through a similar experience, I’d say it’s important to realise that it’s a journey that will make you stronger. It can be hard to always keep a positive mindset, but there is light at the end of the tunnel, and although it may seem like a long process, you will develop a lot as a person.

“It’s made me really strong and resilient. One thing I really used to struggle with was responding to making a mistake, and I don’t really think about that anymore because my mindset is different now. I think about what I can do next to make the situation better, so being mentally stronger is something I’ve definitely noticed in myself.

I have the mindset to get up every day and show everyone that having epilepsy won’t stop me reaching what I want to achieve.

“I want to show other people with epilepsy and other invisible conditions that you can still achieve great things in football. I’m really keen to become more and more involved with Young Epilepsy and I’m interested in becoming a support worker. I really want to help people and share my experience, and also spread awareness within sport.”