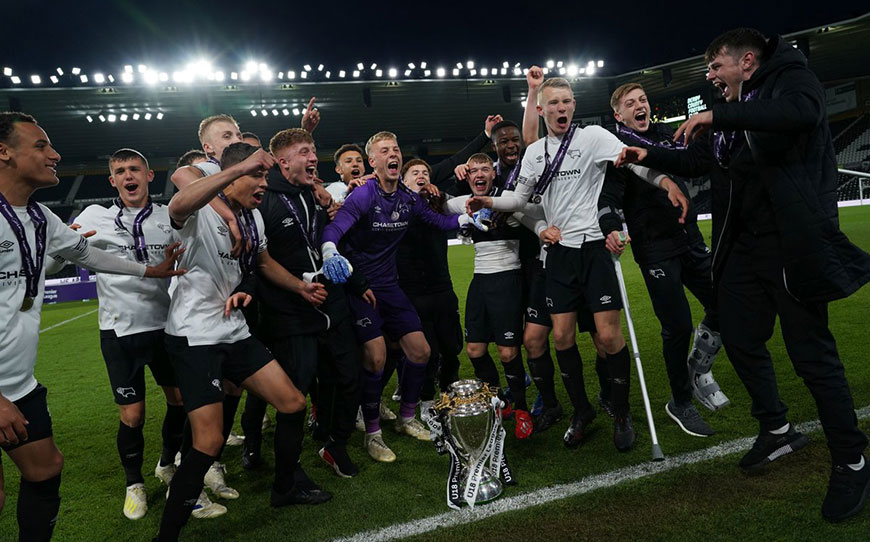 Derby County’s Under-18s have enjoyed a remarkable season, qualifying for next year’s UEFA Youth League after being crowned National Champions following a 5-2 victory over Arsenal.

LFE Apprentice of the Year Max Bird experienced first-team action in three competitions under Frank Lampard, while Tyree Wilson, Lee Buchanan and Jason Knight all featured on the bench in the Sky Bet Championship.

This all coincides with the introduction of a substantial Life Skills programme, formulated by Head of Education & Welfare Simon Ord, with topics including addiction, mental health, driving awareness, financial advice, media training and alternative careers.

Here, Ord outlines his vision of developing the Rams youngsters on a personal level.

The Life Skills programme that we have is fundamental in making sure that the lads exist outside of the football bubble. Every Friday, we have a session on a particular topic or particular theme which I think is massively important.

Although they are great footballers, it’s important to not let football define them and make sure they have a life that they understand and can engage with outside of the football club. They may be elite athletes but they’re still 16, 17 or 18-year-old lads and they’ll have the same issues as any other person of their age, so it’s part of my job to help them with that.

They come in and there’s clean kit for them in the morning, their meals are provided, there’s another clean set of kit after dinnertime and if you’re not careful, they can take everything for granted. You have to have humility, patience, respect and ultimately treat people the way you want to be treated yourself.

We firmly believe that every part of their journey here is integral and has value in leading to an outcome, whether it’s in the classroom or the gym or out on the pitch. It’s a culture that’s supported across all the Academy staff that they have to try to excel in every department that they work with here.

Darren Wassall has been here 10 years and this is my seventh year and we had a discussion about whether it’s just a coincidence that the Under-18s have performed so well and we both agreed that we don’t think it is.

Both the Under-18s and the Under-23s group, we know what characters they are, we know their mums and dads, we know their brothers and sisters and we make a conscious effort to get to know that side of their lives. Therefore, in a working week there’s an element of trust and respect.

The two groups spend a lot of time with each other socially, they rely on each other. They’re all after the same prize of a professional contract but they understand that their best chance of success is to support each other and grow as a team, rather than as individuals.

If you get to a position where you’ve got a contract either here or elsewhere, you still need to remember where you came from, be humble and help others. Even if it’s just a photograph or getting involved with a charity, having a few more strings to the bow is important because they can’t be footballers forever.

If we can instil that mentality into them now that they should invest in themselves, in education and in finding other aspects of your life, that will certainly help with their transition away from football and they can develop themselves while they’re still playing.

I’ve often thought that you get all the pastoral care from 16 to 18 and there’s a danger that when they get to the development squad, we wave them goodbye. In actual fact, it’s probably the time that they need the most care because contracts will improve, they’ll probably live away from home and start to cook for themselves and pay bills, so they’ll still need a lot of support.

At the end of last season I had a meeting with every Under-23 player and developed a personal action plan. They had three options. Firstly, a formal education pathway of distance learning degrees, which two of them have taken up. Option two was vocational studies, so that could be learning French or Spanish – three of them have just finished their Level 2 PT course. Option 3 was to undertake an Open University course.

They’ll be finished training by 1 or 2 o’clock and there’s only so much FIFA and Fortnite that you can play. If they can allocate two or three hours a few times a week to do something else like reading a book, learning a language or practising a musical instrument, it’s just working on that personal development.

This feature is included in Issue 38 of LFE’s Touchline magazine.