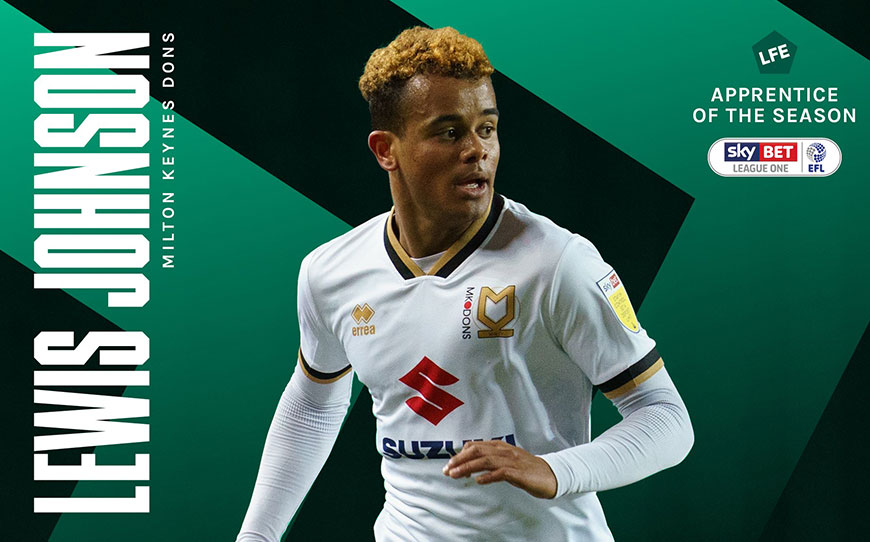 It is not just on the pitch where he has found success, with the 17-year-old producing quality work on a consistent basis on the BTEC Extended Diploma and Sporting Excellence Professional (SEP), as well as undertaking the National Citizen Service programme – a four-week course that provides the opportunity for young people to overcome their fears, make new friends and gain new skills.

“Since Lewis joined us during pre-season in 2019, he has shown an extraordinary determination and focus upon his development, both on and off the pitch,” said Academy Manager Jon Goodman.

“Having been released by Aston Villa, Lewis immediately impressed us during training with his attitude to learning, his willingness to work and his desire to put himself forward into challenging situations.

“Very quickly, Russell Martin invited him to train with the first team, where his attitude, aligned with his abilities, enabled him to make a number of first-team substitute appearances. He then made his full debut against Sunderland in the Papa John’s Trophy, having only just turned 17-years-old.

“Supported by his family, Lewis has demonstrated to all of us that an outstanding education can run alongside a promising football career and we are proud of Lewis’ achievement of recently securing his first professional contract, alongside his excellent grades.”

First Team Manager Martin added: “Lewis has been a credit to himself, his family and our academy. He has shown very early on in his first year as an apprentice that he has a mindset that sets himself apart from other players and people his age.

“He works extremely hard, asks questions and shows dedication to learning as much as he can every time he trains. He has spent a lot of time with the first team squad because of all of these attributes and is a real example to his peers in terms of his behaviour, professionalism and mindset.”

Johnson displays incredible hunger and desire to excel academically, highlighted by his willingness to open communication with his new BTEC Tutors before starting the programme last summer, in order to get a head-start on his studies.

The exciting winger was Head Boy at his old school, and has revisited to present the end of year awards, as well as supporting events to complement other schoolboy’s learning and development.

Nathan Flynn, BTEC Course Leader at MK College, said: “As with any apprentice, the transition from school environment into balancing football and education is often difficult. However, for Lewis, it seemed almost second nature.

“His willingness to embrace change and adapt to different settings really helped to build a culture for the rest of the group, helping them to adapt and overcome any worries or anxieties. Lewis’ leadership qualities have shone through, establishing himself as someone who will not only act as a role model to the group, but also as someone who they can look to for support.

“On the course itself, Lewis consistently produces an excellent standard of work. This has been reflected in his grades so far and in the quality of the research that he undertakes to complete his assignments.

“Lewis has coped well with all of the modules and the different methods of assessment and has really set the precedent for the rest of the class. He is keen to contribute to class discussions and is never afraid to ask for help. Lewis has developed into a conscientious and hardworking learner, who displays an excellent level of motivation in all aspects of the course.

“While coming across as a quiet level-headed individual, Lewis is very mature in his approach to everything he does. He is able to prioritise his studies and home life effectively and conducts himself professionally at all times.

“The way that Lewis has managed to balance his studies to maintain the best standard of work, together with also regularly training and playing with the first team, before being handed a professional contract, has been nothing short of exemplary.”

Meanwhile, Academy Operations & Head of Education Jackie Bushell said: “Lewis shows a good understanding of the curriculum and will endeavour to provide work of the relevant standard, which is well thought out, concise and links to the set criteria.

“Lewis has shown an awareness to develop himself in terms of individual and team performance, and has supported the schoolboy’s lockdown learning programme, highlighting his player journey through an engaging presentation.

“He is confident, reliable and values feedback. He is a good communicator and has developed leadership skills which support him in everyday life situations. Lewis has the strength of character, determination and knowledge to progress through his education programme to a high level. He is a great asset to the group.”