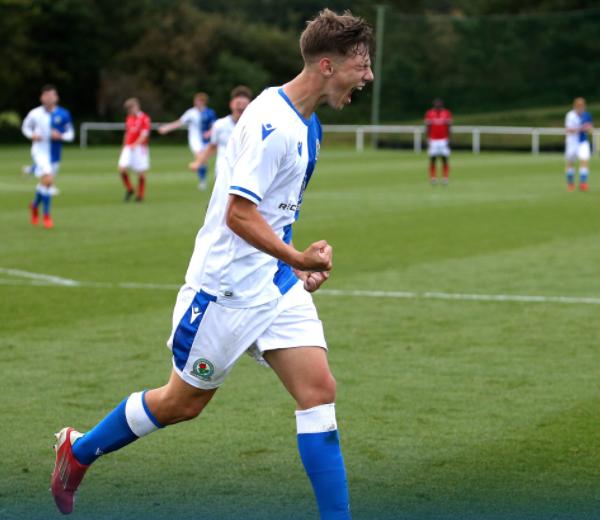 Blackburn Rovers have announced that young hot-shot Harry Leonard has signed his first professional contract with the club, agreeing on a deal that will keep him at the Championship club until June 2025.

The 18-year-old striker, who has been with the club since the age of nine, has been in fine form for both the Under-18s and Under-23s this season.

It comes after a largely frustrating season last year, where he missed almost the entire campaign through injury.

With eight goals to his name in the U18 Premier League already, including a hat-trick against Nottingham Forest, Leonard has been a pivotal part of the Under-18s’ success this season. After 10 games played, Rovers sit at the summit of the league table, five points ahead of second-placed Manchester City.

Under Mike Sheron’s guidance, the youngster has also impressed for Rovers’ Under-23 side this season, making six appearances and scoring in the Premier League Cup victory over Middlesbrough in October.

Speaking to Rovers.co.uk, the striker said: “I’m delighted. I’ve been at Rovers for nine years now and it’s obviously what you work towards.

“It’s a little step in what is hopefully a long career here for me. You sacrifice a lot, moving over to the area at such a young age and a lot of hard work has gone into it, so I’d like to think that the hard work is paying off, but you can’t hold back in football. You’ve got to keep pushing on, keep working hard and keep getting better.

“I’m delighted with how this season has gone so far. Last season was a tough one for me, being injured, but this season has been great so far and, hopefully, I can carry it on.

“The Under-18s have been unbelievable this season. As a team and as a squad we’ve got real quality and the FA Youth Cup result last week showed that. I think we’ve got some really good players in that team and you’ve seen when a few of the lads have been pushed up to the Under-23s, others have stepped in and they’ve not put a foot wrong.

“As I was doing well for the Under-18s, I’ve had a little spell in the Under-23s. It’s a big step up, but I think I’m getting the hang of it and hopefully, the goals will start to come.

“As an Academy player, you look at the manager’s belief in young players and there’s a really good pathway into the first team at the club. He likes to give youngsters an opportunity and when that opportunity comes you’ve got to take it.

“It would be very special if I could do that here. I’ve been here for half of my life now and I know nothing else in football other than Blackburn Rovers. I love spending my time here and it would be a dream come true to progress through to the first team.”