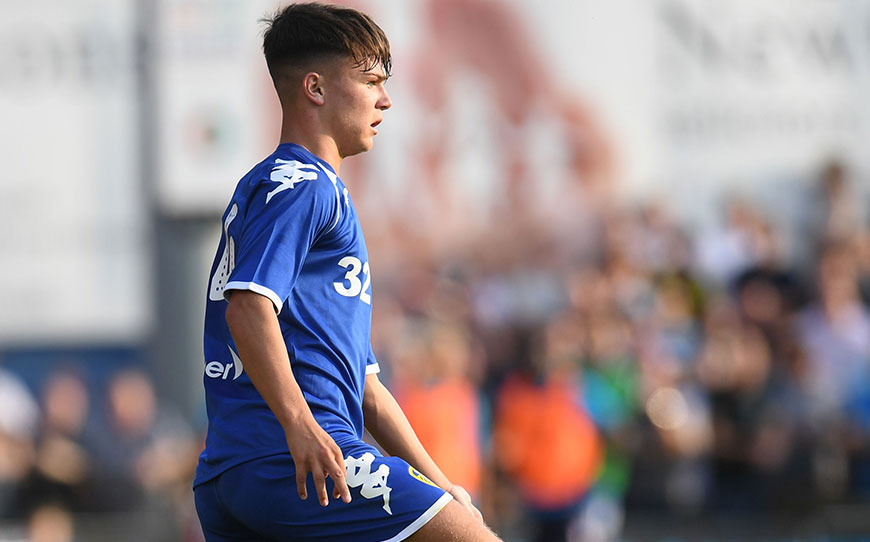 Leeds United’s Jamie Shackleton has enjoyed a remarkable rise to prominence so far this season, establishing himself as a regular member of the first-team squad.

Marcelo Bielsa’s side have taken the Sky Bet Championship by storm, with Shackleton adopting an unfamiliar role at right-back in August before being sidelined with a minor ankle knock.

But for the highly-rated 18-year-old, being a professional footballer is just one aspect of his identity.

Shackleton was named in LFE’s ‘The 11’ last October – which recognises apprentices for their outstanding performance on and off the pitch – with the emerging star earning plaudits for his commitment to the academic side of the apprenticeship.

“You can learn a lot about yourself in a classroom,” he told LFE. “I did the Extended Diploma, which was a bit more challenging with the extra units involved, but I was able to balance my time well and get through it.

“Being at a football club, there are plenty of distractions around and you’ve got to keep your head focused. You’ve also got to work with your classmates and there is teamwork involved in that, which can be taken on to the pitch.

“In my opinion, the way you are in the classroom reflects the type of player you are. If you work hard, get your work done, focus and try to make others work hard too, then it’s more than likely that you’re going to be that type of person on the pitch, in terms of being a leader and someone that the rest of the group look to when they need a bit of a lift.”

Shackleton’s efforts to go above and beyond do not end there. The Leeds Academy graduate has dedicated a significant amount of his spare time to helping the local community by attending local football team events to hand out new kit and encourage participation at grass roots level, as well as supporting various local charity initiatives.

“It started when a couple of friends, who are Leeds fans, had asked me to just show my face at some of their events and speak a bit about what I do,” said Shackleton. “Although it wasn’t that big of a crowd, it’s the first time I’ve really spoken in front of a group of people, so that experience definitely gave me a lot more confidence.

“You see senior footballers doing that sort of thing all the time, so if you’re aspiring to be like them on the pitch, there’s no reason not to do the same off it as well.”

The talented youngster even helped to raise money for a local man who had developed a life limiting illness and could no longer work, while Shackleton also spoke fondly of his experience visiting the Martin House Hospice, which provides family-led care for children with life-shortening conditions.

He said: “It was another set of friends who live just up the road from me that told me about the guy. He is a massive Leeds fan and so are his family, so they were over the moon that I’d come down to speak a bit and get to know them and ultimately it helped to raise some money for him, which is great.

“I know it’s probably not the usual sort of thing that a young player would be doing but it was just a case of ‘why not’? They’re local and know I play here and they’d asked if I would help out, so I didn’t turn the opportunity down. It was a different experience to anything I’ve done before, so it was a bit daunting but it was really enjoyable.

“As a club, we’ve also been down to Martin House – we go every Christmas. It’s a place for children with serious illnesses to get a change of scenery, enjoy some fun activities and hopefully make some great memories.

“We went to meet some of the residents there at the time and were shown around all the different rooms. I loved the experience, it was really interesting to see the work they do and puts everything into perspective.

“It’s so important to visit places like that because we can make a positive impact on their lives and it shows us what’s going on in the real world away from this bubble of football, so it’s important to get those life skills and be able to relate to people with different backgrounds and needs.

I only see positive outcomes from getting involved in community stuff like that and helping people who are less fortunate. It’s not just about being good at football, that sort of thing will help you become a good person and a good role model.

“You’re learning a lot and you’re developing yourself off the pitch as a person and if staff and other people around the building can see that then they’ll know that’s going to help you be a better team-mate and ultimately a better player.”

Shackleton’s off-field development has certainly contributed to his increasing success on it.

Aside from his academic progress, the Leeds-born teenager also displayed great resilience to overcome a seven-month injury lay-off during the first year of his apprenticeship, eventually returning to Under-23 action before signing his first professional contract and earning a spot on the club’s end-of-season trip to Myanmar.

“It’s tough coming into training, seeing the boys out on the pitch and knowing you’ve got to go in the gym instead,” he said. “But I made sure I came back in good shape. I didn’t get much of a summer, but I was ready to go for the next season.

“I got a lot stronger and when I got back on the pitch I was able to put myself about a bit more, so I’d say there were definitely some positives that came from being out for so long.

“Going to Myanmar was my first experience of being away with the club. They’re mad for football out there – so many people treated us like celebrities and it was all a bit mad really!

“I don’t think they knew who we were but just seeing an English club coming to play in their country, they loved it. It let me know I was close to the first-team at that point and gave me an insight into first-team experiences and being around the senior players.”

And under new manager Bielsa, Shackleton has become a permanent fixture in the first-team set-up. “I’ve enjoyed working with him and his staff from the first day of pre-season,” Shackleton added. “It’s been really tough – there’s been a lot of fitness training, but also a lot of ball work as well. There were a few of the Under-23s players that were selected to train with the first-team from day one of pre-season and I was one of them.

“In the second week of pre-season, we spoke about the fans and how they’re the most important people to this club, how passionate they are and what it means to them to go and watch us play football.

“Their lives involve a lot of hard work throughout the week to be able to afford a ticket for the weekend, so we had our own insight into a bit of hard graft away from football by going round the whole training ground clearing all the litter from the pitches, bushes, everything really.

“At that stage I hadn’t played in the first-team yet, so it was still my dream to play for the club and I’m a Leeds fan, so I knew exactly what it meant to come and watch anyway. The lads are all really grounded anyway, but a task like that definitely just reinforced what the club means to everyone.”

The versatile midfielder-turned-defender ensured he was prepared to hit the ground running with a disciplined off-season schedule and has benefited from the tactical wisdom of his Argentine boss.

He continued: “Obviously, going from Under-18s and Under-23s football up to the first-team is a challenge and you’ve got to be ready for that. We had five or six weeks off over the summer and I just kept working hard on my fitness and made sure I was ready to go.

“To start with, he’s played me a bit at right-back and he’s spent a lot of time with me, learning different movements and different requirements for the position because I’ve never played there before.

“The manager’s obviously seen qualities in me to put me there and I feel I’ve adapted well so far. I’ve enjoyed playing there, with the way we play it’s an attacking position and I like to go forward as I did in midfield, so it does suit my game.

“I think it’s a good quality to be able to play a few positions. I used to be a winger when I was nine or 10, then I’ve played centre-midfield ever since and now I’ve been pushed to right-back for a few games.”

A 4-1 away victory at Derby County was the occasion for Shackleton’s first involvement at senior level, appearing as a 73rd-minute substitute, while he then played the full 90 minutes of a 2-1 Carabao Cup win against Bolton Wanderers three days later.

And the starlet was thrust into the spotlight the following week as he was handed a full debut in the Championship live on Sky Sports against Swansea City, providing an assist in an impressive display after filling in at late notice for Liam Cooper, who was injured in the warm-up.

“It was pretty special, I didn’t sleep much that night,” Shackleton said. “It was just a dream come true for me as a Leeds fan and local lad to go on the pitch and play for the club. This club’s got a great record of producing top players from the Academy and hopefully I can be one of them.

“I found out about three minutes before we went out to the tunnel, so there wasn’t really any time for nerves, so I guess that helped really and I think I did fairly well on the night too.

“Now I just want to see if I can get as many appearances as possible under my belt and help the team in any way I can towards our goal of getting promoted to the Premier League.”

Despite penning a new three-year deal in August and drawing plenty of acclaim, Shackleton’s ambitions off the pitch continue to grow, with plans to get back in the classroom.

“I’m looking at studying for my UEFA B Licence in Coaching this year and get that in the bag early so that I’m in a good position already for when I finish playing,” he said.

It’s definitely something that I’ll be able to use as a way of focusing my mind off my own performance and probably take some pressure off in that way, as well as obviously setting me up for a future after football, which hopefully won’t be for a long time yet.

“It can also help my game right now, learning how to support and deal with players and it makes you think about the bigger picture of the game rather than just your own individual role, so it’s definitely something I’m hoping to sort out soon.”