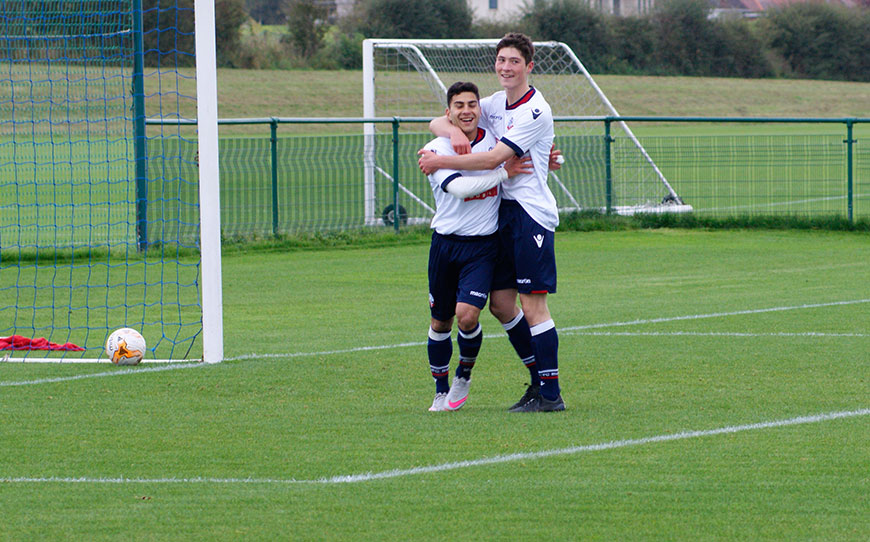 First year apprentice Samizadeh was too hot to handle for Sheffield United last weekend hitting a double in Wanderers 4-0 victory over the Blades.

That took his tally to 8 goals from 12 appearances this term and Lee was eager to credit the forward for his impressive start to the season.

“He’s more than a luxury because he scores goals but he works his socks off for the team as well,” Lee said,

“He throws his body on the line and presses the opposition from a high perspective. So all parts of his game are good and he’s learning from it, but you’ve also got to have the ammunition in providing the goals for him. The lads who work around him know that he’ll make mistakes but give him an opportunity to score goals and he’ll create something and score goals for you, but the work ethic of the lad and the team as a whole is fantastic.”

Lee, whose association with Bolton dates back over 20 years is keen to guard against over hyping Samizadeh at this early stage but admits the signs are promising.

“He’s going to get introductory time with the under 21s but he’s a raw product at the moment,” Lee continued.

“I’m too experienced to say that he’s going to be a first team player but he’s got potential. But there are a lot of raw negative things in his game that we’re trying to eradicate and it’s a great learning curve for him. We’ve stepped him up from 18s to 21s and then brought him back to 18s, and we’re developing him in a manner where it’s not too much too soon for him.”

“The lad wants to learn which is great and he’s got that work ethic so yeah we’re pleased with him because he scores goals but we’ve got to keep his feet on the ground. He’s a level-headed lad and there are 19 or 20 other players around him who make him as he is in this moment of time.”

A number of scouts were once again in the crowd at the Eddie Davies Academy training ground last weekend and Lee expressed his firm belief that the club will keep hold of its best young talent.

“Well I don’t think we will struggle to keep hold of them (his players) because this football club has a philosophy that if we’ve got players and they play in the first-team then obviously it generates interest for the club.”

“If they’re generating interest for the club it must mean they’re doing something well. So if they’re playing on the first team pitch and developing it’s only good for the first-team and getting us up that league.”