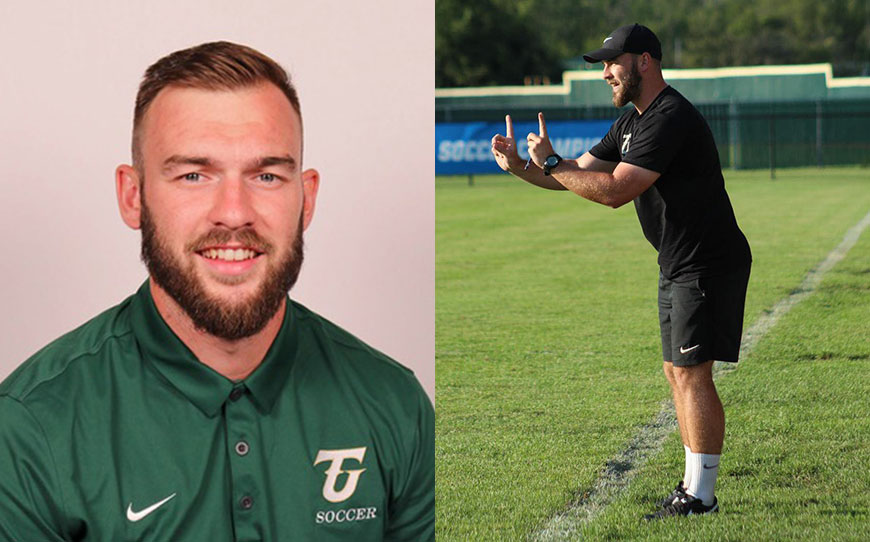 From Tranmere to Ohio, football has given Nathan Jones a life he never expected.

After completing his apprenticeship in 2013, Jones swapped the Merseysiders for a U.S. scholarship at Urbana University, where he starred as a student-athlete before moving on to coach and study a Masters degree at Tiffin University.

He told LFE: “It wasn’t until the first few months of my second year as an apprentice when I started to consider alternative options. My regional officer, Claire Wilberforce, came in and spoke about exit routes and the U.S. interested me straight away.

“I’d never been there beforehand, not even on holiday, so it was a big leap of faith. It took a couple of months to adjust, but the people are great, the culture is similar and the food is pretty much the same, so it isn’t actually too different to being back home.

“It did help that I came out with Lewis Dunne, who was my teammate at Tranmere. It’s funny really because we were together at Urbana for four years and now we coach in the same league.

“As a 16 or 17-year-old at Tranmere, I would never have thought by the age of 25 I’d be living in America and getting a Masters degree. And to top it off, my Masters is paid for and my Undergraduate degree was mostly funded via a scholarship, so I’ve come out near enough debt free.”

Jones’ experience in the States goes beyond being a student-athlete, with many opportunities to travel around the country and meet people from all over the world, as well as integrating with other major American sports. “I played with people from France, Germany, Holland, Brazil, Spain, Portugal, Canada and obviously America,” he said. “There are so many nationalities that come together to form a team over here and you get to learn about all the different cultures.

“The travel was the thing that I loved the most. We flew to New York when we reached the last 16 in the country in my senior year, which was a whole new experience. That’s something you’d never get back home and although we lost the game 2-1, I really enjoyed it.

“I’ve not ventured out to the West Coast yet, so that’s on my to-do list, but I’ve been to basically every state on the East Coast. I’ve visited Florida a few times, I went to Miami for Spring Break, Virginia Beach was great and we’ve even gone over to Toronto in Canada. I would never have got to do those types of trips if I lived back home and that’s something that just caps off the experience.

“Ohio State was 45 minutes away from Urbana and we’d go to their American football games with over 100,000 fans in the stadium. Being involved with those different sports is another unique learning experience.

“At Tiffin, there’s a kid on the baseball team this year that could get drafted. Nate Washington is a Tiffin alumnus who won two Super Bowl rings. He floats around the campus quite often and you see him just chatting to people and helping out with various things, so it’s crazy really.”

A high achiever on and off the field, Jones received several individual honours throughout his time at the UU. The two-year captain was a Conference Defensive Player of the Year and picked up first team all-region and all-conference awards in his Senior year, while he also broke Blue Knights records for most clean sheets, save percentage, minutes and games played.

In addition, a combination of a strong academic profile, coaching at a local youth team, serving as a resident life assistant and volunteering in the Urbana athletics department led to him earning Male Student-Athlete of the Year 2015-16 and being an MEC Male Scholar-Athlete of the Year Finalist.

Jones was also recognised nationally as a Chi Alpha Sigma Inductee, which rewards outstanding performance in sport and education. “Being a full-time student and footballer can be time-consuming, but you’ve just got to manage workload,” he added. “The step up to the Masters has been more rigorous, but doing the Extended Diploma during my apprenticeship really helped to prepare me.

“I’ve never been a superstar academically, but the Extended Diploma forced me to work a bit harder and got me into the routine of balancing football and education, which has helped me transition into higher education. I ended up graduating a semester early as well.

“Awards are huge in this country and it’s nice to be recognised for your hard work. The post-season is brilliant, too. It’s fantastic to be competitive and play for a regular season league, a conference trophy and national rankings.”

Having already spent six years across the pond, there are no signs of Jones making a permanent return to the UK. The Welshman is currently Tiffin’s Graduate Assistant Men’s Soccer Coach and Goalkeeping Coach for the men and women’s teams, while he is determined to become a head coach in the future.

“When I was at Tranmere, I helped out with the Under-8s to the Under-16s and I fell in love with coaching from there,” said Jones. “I’ve had a number of different coaching positions since I’ve been out here and it’s been one of the best experiences.

“In terms of growing as a coach, the opportunity to work with girls and boys and plenty of different age groups has been great for my development. Managing budgets is an additional part of being a collegiate coach and I’m also part of the recruiting process.

“Bringing in young guys and seeing them have the experience that I had, watching them flourish and enjoy the journey while getting an education as well, it’s honestly the most rewarding aspect of my time here.

“Last year, we won the regular season and our conference tournament and that was unbelievable to finally win some silverware after being here for so long. We were named Regional Staff of the Year, so that was fantastic. I’d love to end up as a head coach within the college game. No matter what level, that’s definitely a career ambition.

Coming to America has changed my life forever and it’s something I would certainly recommend.”