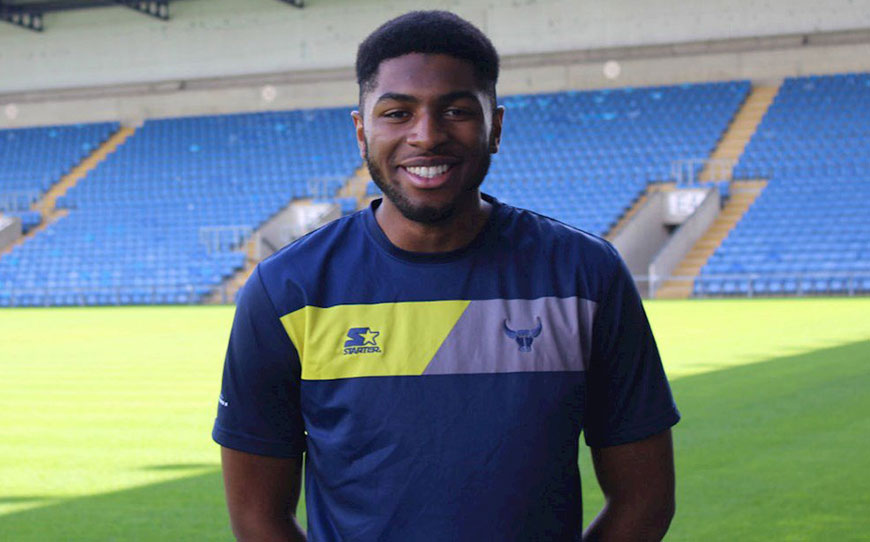 Oxford United have completed the signing of Steven Johnson-Fikula after the teenage defender impressed scouts at LFE’s Assessment Trials in May.

Three trials events took place this year, with around 250 released players vying for a route back into the game during showcase matches in front of scouts from pro and non-league clubs, as well as Universities from the UK and abroad.

Having been informed of his release by EFL Youth Alliance North East champions Mansfield Town at the completion of his apprenticeship, the 18-year-old picked himself up and produced a standout display at the Midlands venue (Stafford Rangers FC).

He said: “As a young lad, when you’re at the stage where it comes to contract decisions and you get told that you’re not going to get one, it’s certainly difficult to take in.

“The Assessment Trials are extremely helpful, especially for a lad who doesn’t really know what to do next. It’s so simple – you sign up, give your details, you get a confirmation email and from there you’re good to go. You just turn up on the day, get assigned to a team and you just play your game.

“There was a side of me that wanted to go out and show that I deserve to be somewhere, but there was the other side that said don’t over-complicate it, don’t try things I’m not used to, because it might not work out in my favour. I had to limit myself, discipline myself, and just go about about my normal game.

“I told myself ‘go out and enjoy it, express yourself; there’s no pressure’ and when I enjoy my football, it’s when I perform at my best. I went out there, played my natural game and must have done well because I caught the eye of Oxford and a few others.

“I went there not knowing what to expect, but the Assessment Trials are such a good idea. Following the trials, I was signed up in around three weeks. Oxford called me the day after and asked me to come in for another trial; two weeks after that, they gave me a call back and said they were interested in offering me a deal, and a day or two after they wanted me to come in and sign.”

U’s Academy manager Dan Harris attended the trials in search of recruits for the club’s new Under-23 squad. He told LFE: “I think anyone who’s been in the game a while knows there’s no one way of doing this.

“There are different pathways for different players and some lads take a bit longer to develop, some need a little knockback to come back stronger and so for us as a football club, we’re putting an Under-23s team in place next year.

“We’ve got a manager (Karl Robinson) who will play young players. He’s taken Dele Alli at MK Dons and put him in, at Charlton he put Ademola Lookman in and gave him an opportunity, so we’re in a very fortunate situation that we’ve got a gaffer who will play young lads if they’re ready and my job is to make sure that these young lads are ready to play.

“We’ve taken five or six lads out of our existing programme in the academy to set the culture and get things established and if we can find three or four lads that can come alongside them and hopefully add some quality to that as well then that’s what we’re looking for.”

Johnson-Fikula fit the bill for Oxford and he is now preparing for a pre-season trip to Lilleshall National Sports Centre ahead of the new campaign, where he will be hoping to gain some early action in the Checkatrade Trophy and Carabao Cup.

The tall defender added: “It was a massive achievement for myself, and a proud moment for me and my family. My parents sacrificed a lot, taking days off work and things like that to get me to training, to games. Earning this contract was a way of repaying them and saying thank you, letting them know that those journeys down the motorways and everything they did for me was all worth it.

“Oxford have got a really good reputation of getting youngsters through and that’s one of the things that attracted me to the club. The target is to try and stay in and around the first team, to put in the performances in the U23s to keep my name in the mix – but the main thing is to keep improving as a player.

“Pre-season isn’t necessarily something that footballers always enjoy but I’m looking forward to it. It’s a great chance for me to go in, make a good first impression and show what I’m about.”

To watch the full interview with Dan Harris during LFE’s Assessment Trials, click the link below: