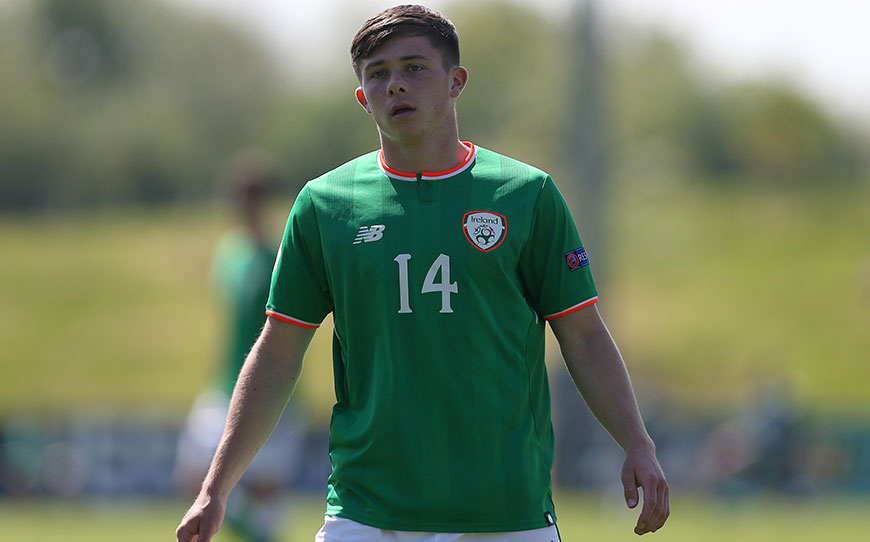 Adam O’Reilly has achieved considerable success as an apprentice.

The Preston North End starlet signed his first professional contract in January, just weeks after making his first-team debut. He has also won two LFE Goal of the Month trophies, represented the Republic of Ireland at Under-17 level and has previously been selected in LFE’s ‘The 11’.

O’Reilly joined the Lilywhites in December 2016, leaving behind his family in Cork. Although it has not always been plain-sailing, the 18-year-old believes the apprenticeship programme has benefited him as a player and a person.

“Since I came over from Ireland, it’s been a big step for me,” he told LFE. “It’s brought me out of my comfort zone a lot. My parents weren’t sure about sending me here because they didn’t know if I was ready yet and I was very young, but the boys have all welcomed me into the group and it’s really worked out.

“As a footballer, you’ve got to be confident. I was struggling to start with because I didn’t know many of the boys and I used to be quite shy. Coming over here has really developed me as a person and helped me come out of my shell. That’s helped me integrate with the group, while I’ve also had to become more independent in other ways considering I’m living away from home.

“Sometimes you’re going to get homesick, but you’ve just got to keep your head. One of the big things is to get out more. If you sit in digs and you’re on your own at weekends, it can be hard because you end up just thinking about home. You need to keep your mind occupied and you can turn it into an advantage by using all the free time in a positive way.

“We go to the gym and do extra work on the training ground, sometimes we just chill out and go bowling and build that bond between team-mates, other times we just grab a coffee. Then obviously there’s the education side of things to focus on. It’s about getting that balance right.” Having developed his personal skills off the pitch, the teenager has thrived on it, winning North End’s Scholar of the Year award for two successive seasons. O’Reilly captained the youth team to a successful campaign this term, while he earned his Sky Bet Championship bow at Aston Villa during the Christmas period.

“My highlight has got to be my debut,” said O’Reilly. “From when I first started playing football, that’s what I’ve been working towards. Hopefully there’s more to come.

“Having been in the first-team, I’ve started to look at my game more and do a lot of analysis and it’s things like that off the pitch that will help you on the pitch because I feel more aware of my game, which definitely helps when you make the step up.

“To have the other Irish lads here is a massive benefit as well because they’ve gone through the same situation in terms of leaving home and settling into a new environment.

“I always try to be a leader and set an example, I think it’s just a personality trait that I have. But also, I think the fact that I’ve received help from those guys in the first-team and know how important advice and support can be, that’s what makes me want to help others as well.” Having also experienced a loan spell at Hyde United this season, it has been a busy schedule for O’Reilly during his two-year apprenticeship, combining first-team and international commitments with studying the Extended Diploma, while he has also been involved in some community activity in recent weeks.

The young Irishman said: “My parents have always told me to concentrate on my education because anything can happen in football. You could get an injury or just not perform and fall out of favour, so you need to have a good education to put your mind at ease that there is another path for you.

“I’ve also been looking at stuff outside of football once I’ve finished the college work, just to keep my mind ticking over. I’ve thought about doing a computer course or something related to technology because that seems to be a strong industry and it’s something that I could move into after football.

“Getting involved in the community is a different experience but I really enjoyed getting to meet over 100 kids at St Stephen’s Primary School. Being a role model at this age is hard to get used to and it hasn’t really hit me yet that what I’m doing can affect other people, especially the younger kids.

“I just want to show what I’ve done to get to the stage I’m at now and hopefully be a positive influence for them to take note of and use as inspiration.

“All these experiences away from the game are so important. When you go out on loan or move into the first-team, you need to come out of your shell and speak to the players because if you don’t, it’ll affect your experience on the pitch. You need to be vocal so that you can fit into the group and get on the ball. You develop these skills through experiences off the pitch.”