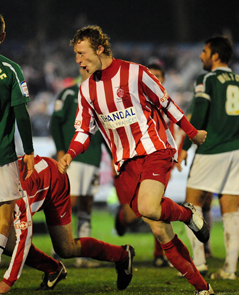 Paul McCone was an Apprentice at Wolverhampton Wanderers between 2008 & 2010. At the end of his Apprenticeship he was released by the club. He then started work at Vale Pride Developments as an Apprentice Bricklayer and joined Evostik South Premier League side Stourbridge.

In April 2011 he won the Derek Spencer Award as the Guild of Bricklayers, West Midlands “Junior Bricklayer of the Year”. In November 2011 he scored the first goal for Stourbridge as they knocked Plymouth Argyle out of the FA Cup.

Paul McCone is rebuilding his career literally brick by brick as a junior ‘brickie’ at Vale Pride Developments after getting the chop at Wolverhampton Wanderers in 2010.

McCone, who is now a Brickwork Apprentice, studies the theory side of his programme on day release at Walsall College while working practically for a West Midlands based construction firm throughout the rest of the week.

And he appears to be cementing himself in to a new occupation with little trouble. In April 2011 he won the Derek Spencer Award as the best Junior Bricklayer in the West Midlands after undergoing a 5 hour assessment on his speed, accuracy and overall appearance of a feature piece of brickwork (a welsh arch).

The regional final of the prestigious Guild of Bricklayers competition took place at Warwickshire College’s new Rugby Centre on Friday 15th April, with the best of college students from across the West Midlands taking part.

“This was a great experience for me to test my skills against the best in the Midlands, and I am delighted with the win,” said McCone.

Walsall College Trainer Assessor, Les Betts added: “Paul put on a fantastic display of his skills and we are very proud of him. The Guild of Bricklayers competition is designed to find the very best brickwork students from across the country and we will all be supporting him to compete at the senior level next year.”

As well as prospering off the pitch, McCone recently made the national papers for his performances on it after helping Stourbridge reach the 2nd round of The FA Cup for the first time in their history.

The 20 year-old hit the clubs first goal in their 1st Round giant killing of League Two side Plymouth Argyle.

“That night was unbelievable,” McCone told LFE. “You dream as a young player of playing in the league and playing in the FA Cup in the proper rounds and to be honest I thought that chance would pass me by. Not many sides from our level get this far. It’s great for the town and it’s a chance for us all to put ourselves in the shop window and show what we’re capable of.”