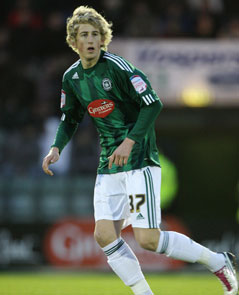 Released by Plymouth Argyle in May, Matt Rickard has turned his back on English football to start a dream new life in America.

The 18-year-old forward quit the south coast in August to take up a soccer scholarship at the University of Michigan.

The youngster, who excelled in Argyle’s youth side, has headed to the States after being unable to force himself in Peter Reid’s long term plans at Home Park.

His first-team action limited to a seventeen-minute cameo appearance as a substitute in last January’s 2-0 home defeat to Oldham Athletic.

Unwanted by the Pilgrims, Rickard reputation as a promising youth player was enough to prompt the offer of a trial with an unnamed Championship club during pre-season however by then he had made up his mind to turn his hand to a new type of challenge.

“I just feel it’s too good an opportunity to turn down, said Rickard of his impending four year journey to earn a Sports Science Degree in Michigan.”

I could’ve stayed in England and gone on trial but I’d already given my word to Steve Burns (Mens Soccer Coach, University of Michigan) and his assistant Andy (Wagstaff) that I was going to join them.”

“They’ve been in regular contact and have told me how excited they are that I am joining them. They have helped me out in terms of guidance around the SAT, helping me find a place to live, sorting me out with a coaching job in the summer and really just doing things you’d expect a professional club to do for a new signing”.

Already settled in to life on Campus Rickard is keen to do his utmost to make a success of his scholarship. He has however not forgotten that should he prove a hit on the pitch it could reopen doors back in to the world of professional football with one MLS club already alerted to his presence in Michigan.

“Steve and Andy have told me that they have links with Toronto FC and that Paul Mariner (Ex Plymouth Player & Manager/Coach) has been in touch about me,” continued Rickard.

For now I’m happy concentrating on my studies but football really is a funny game so you never know.”