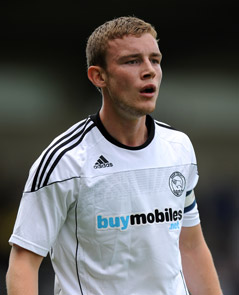 In the summer of 2009 schoolboy central defender Mark O’Brien seemed to have the world at his feet. He had already played first-team football as a schoolboy and had signed as an Apprentice at Derby County.

However during a routine cardiovascular screening a defective heart valve was as he was about to start his Apprenticeship. Initially he was told the operation could be done in two-years time. That schedule was drastically brought forward – he went under the knife just two weeks later.

A period on the sidelines followed and his recuperation seemed complete going in to the 2010 – 11 season, however, injury struck again, this time in the form of an ankle problem that wrote off much of last year.

Finally back, fully fit and now a professional he did enough during pre-season to catch Manager Nigel Clough’s eye and was drafted in to play against Birmingham City on the opening day of the League season. He has not looked back since.

Academy Manager, Darren Wassall is better placed than most to judge O’Brien’s progress: “He’s done remarkably well if you consider what he’s had to contend with,” said Wassall. “For a central defender he’s not the tallest player you’ll come across but he’s got a fantastic spring and he reads the game well.”

If he had been fit I’m sure he would’ve played a lot more first-team games by now but he’s got back in during pre-season on merit and carried that form in to the league season.”

An ever-present so far this season and with his injury troubles seemingly behind him, O’Brien is now eager to make the most of his time back on the pitch.