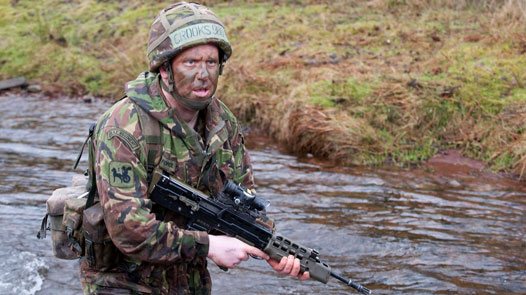 Lee Crooks has made a dramatic transfer from the football pitch to face the front line of Operations in Afghanistan after joining the elite team of the RAF Regiment.

In a turbulent time at Manchester City in which he played for 5 different managers in his first season as a professional, Crooks made 83 games for the Sky Blues before leaving Maine Road in 2001.

Spells at Barnsley, Bradford City and Rochdale followed before the defender dropped out of the League in 2008 and then in 2010 came to a momentous decision about his future, joining the RAF as a Gunner.

“My younger brother is in the Army, but when I looked in to it I thought the RAF Regiment was the one for me and have never looked back,” said Crooks.

Currently at Sennybridge Training Range in Wales for 2 weeks to practise live firing drills as he takes part in Exercise Gunners Grip, Crooks has drawn comparisons between his former and new careers, he continued:

Both roles are about working as a team, being there for your team mates and moving forward as a team.”

“You have to be mentally and physically fit for both roles, but you train as a professional footballer for 90 minutes so the training is a lot more explosive, whereas being a Gunner you have to be robust and have a lot more stamina as you are carrying heavy weight over longer distances and over longer days and nights” he added.

Sergeant Gareth Saunders 31, a basic training instructor at RAF Honington has been putting the former footballer through his paces since day one:

Crooks who is now preparing for his first tour of Afghanistan at the beginning of next year added:

“Going back to life as a professional footballer, you train all week to prepare for the Saturday game and put everything that you’ve trained for in that game and its exactly the same as this.”

I have done my training and am now really looking forward to putting it into practice.”