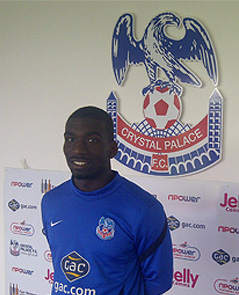 Four years ago, Kieran Kenlock was just starting his Apprenticeship at Crystal Palace. Two summers ago he was released by the club but now he is back, putting his experience to use as Assistant Sport Scientist.

With an outstanding set of GCSE results, Kenlock was a well regarded Apprentice at the club who gained Distinctions across the board on the BTEC National Diploma. He was also one of the top performers at the UK Sport ‘Pitch to Podium’ testing at LFE’s Careers Events, making him a target of other sports. But what he wanted most – a professional contract at his local club, Crystal Palace – failed to materialise.

“At first it was quite difficult to come back to a club that in essence, didn’t want me,” admits Kenlock, a strong full-back in his time at Selhurst Park. “However, over pre-season it’s been easier and the lads here have been great with me.”

When Palace gave Kenlock the dreaded news, he knuckled down to complete his BTEC with the aim of obtaining the highest grades possible and, having already made applications to several of the country’s most renown sporting universities, prepared for the next period of his life.

That started when he accepted a place at the prestigious Loughborough University to study for a BSc (Hons) in Sport and Exercise Science. Having completed his first two years at Loughborough, he is also keen to ensure, his work placement, at Palace sets him up for the final year of his course.

I’ll be using the next twelve months to see what else is out there for me. It’s important for me to try and experience different opportunities and then refocus my efforts ahead of my last year at Loughborough.”