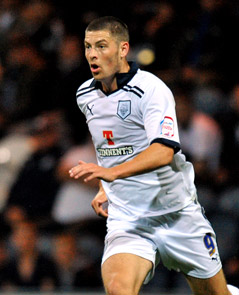 Jamie Proctor earned a reputation as a powerful young forward coming through the ranks at home-town club Preston North End.

He scored fifteen goals at youth-team level in 2008-09 and was part of an U18 side that knocked Manchester City and Sunderland out of the FA Youth Cup the following year.

He scored his first senior goal for North End on the final day of the 2010-11 in a 3-1 win against Watford and started the following pre-season on fire, bagging 10 goals in 7 games to stake a place for a regular run in Phil Brown’s first-team.

However a double hernia proved a major injury setback and he struggled to regain his place in the side once Brown had been replaced by Graham Westley in the January of 2012.

He moved on to Premier League side Swansea City during the summer of the same year and is now hoping to make the breakthrough in South Wales.

Despite moving from League One to play for former Barcelona and Real Madrid star Michael Laudrup in Swansea, Proctor admits that some of his happiest times came at Deepdale.

“I had the best two years of my life as an apprentice at Preston,” Proctor told LFE.

It’s the most enjoyable time you’ll have in football. It’s not quite as serious as when you get in to the first-team but you’ve got to work hard and do everything you can to make sure you get to where you want to be in the future.”