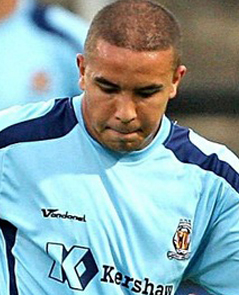 Jai Reason signed professional terms with Ipswich Town in the summer of 2008, two years after joining them as an Apprentice.

However with the likes of Owen Garvan, Tommy Miller and Alan Quinn blocking his path to the first-team, the then 19-year-old midfielder had few chances to impress.

Just six months after signing his first professional deal he was told he would not be getting another one at Portman Road. The devastating news delivered by The Tractor Boys then Boss Jim Magilton.

However the Northern Irishman did offer him a shot at redemption by setting him up with a loan move to Blue Square Premier outfit Cambridge Utd to see out the final six months of his Town contract under the tutelage of Gary Brabin.

The move to the Abbey Stadium proved to be the perfect tonic for the then 19 year-old playmaker. Creative more than combative, Reason adapted quickly to life in the Conference and helped the U’s reach the Blue Square Premier Play-off final where they faced Torquay Utd for a place in The Football League.

Unfortunately that battle was lost, a 2-0 defeat for Cambridge at Wembley spelling the end of Brabin’s tenure in charge. Despite making 36 appearances during 2009 – 10, the youngster was surprisingly released by Cambridge at the end of that season.

After a short spell at Crawley Town he bounced back in style by helping Braintree Town win the Conference South. Shortly after Reason was capped by England C for the first time in 2 years and helped Braintree to an impressive 12th position in their Conference National debut season.

However after being consistently deployed out wide, Reason wanted a central midfield berth and so moved to Eastleigh where he penned a two year deal in May 2012. He now hopes to replicate the success he experienced with the Iron.

Eastleigh have got everything in place, they are buying some good players and we will definitely be pushing for promotion next season.”