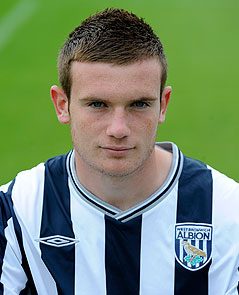 Gez Mulholland was an Apprentice at West Bromwich Albion (WBA) between 2009 & 2011. At the end of his Apprenticeship he was released by the Baggies.

He is now studying for a Degree in Sports Journalism at Staffordshire University while playing non-league football for Sutton Coldfield Town.

Gez Mulholland is determined to write some new headlines for himself after starting a Sports Journalism degree at Staffordshire University.

The former West Bromwich Albion defender who has been capped at youth level by Northern Ireland left the Hawthorns last summer at the expiry of his two-year Apprenticeship.

While some youngsters ponder what to do after full-time football Mulholland had during his time as a Baggie started to develop a keen interest in the media side of the game.

“I was in the press box on match-days helping out the club’s media department from time to time and I started to realise that this might be for me,” said Mulholland.

“While I was at Albion I got to know Mitch Pryce, a respected senior football producer who also heads up the Sports Journalism course at Staffs. After speaking to him I decided to apply for the course and was lucky enough to be accepted.”

“I think it helps that I’ve obviously been at a club as I have industry experience that is probably way ahead of other people my age that said I don’t think the University would’ve treated my application as seriously if I hadn’t been able to demonstrate that I was hard working and had passed my BTEC with a triple distinction.”

“Gez is a model student and takes a professional attitude to his work. Coming from a football background has been a help to him but he is now committed to learning new skills that should equip him for a career in the media,” said Pryce.

While his journey from Halfords Lane to College Road, Stoke-on-Trent may be little over forty miles, Mulholland does admit to missing life at the Hawthorns even if he feels well settled at the University.

“You miss football because it’s been part of your life and daily routine for a period of time,” said Mulholland.

“That said it hasn’t exactly been hard to slip into the student lifestyle and it’s helped that I had the period from the end of the season in May to starting here in September to adjust myself to what was coming.”

“The course here is going well and you can’t help but learn from people like Mitch (Pryce) and Pete Brookes who have been there and done it. Those guys command respect and it’s easy to learn from them.”

With his studies moving in the right direction the 18 year-old full-back’s next challenge is to start playing regular football again, in a season which has so far been hampered by injury:

“I broke my arm in my first game for Sutton Coldfield Town so I haven’t really played much yet this season. I’m on-loan at Kidsgrove Athletic at the moment so I’ve been able to get some games and it’s just a case of playing catch-up and building my match fitness now.”