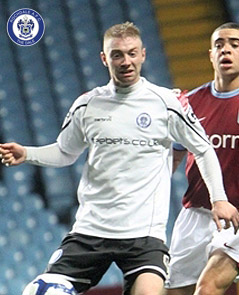 Dennis Sherriff is keen to use the non-league game as a a springboard back up the leagues after feeling unfortunate not to earn a professional deal at Rochdale.

The youngster hit forty goals in two seasons for Dale’s youth and reserve sides and admits it was a blow to be told that he didn’t have a long term future at the Club.

A loan spell with Woodley while at Dale prompted him to join Stockport based Evo Stick League side in the summer, a breeding ground that players like Liam Dickinson (Barnsley) and Simon Hackney (Colchester United) have both progressed from.

But Stalybridge Celtic had seen Sherriff at LFE’s North West Assessment Trial and taken note. Impressed by the youngster they invited him to join their ranks, an approach that was at first rebuffed, however as the season started Sherriff opted to test himself at a higher level an make the move over to Tameside.

“It’s been good for me at Stalybridge, I’m the top scorer in their reserve team and am always in the first-team squad it’s just a case of getting in and staying there,” he said.

Most of our players have got good league experience and it is difficult to get someone out of the team if they are doing well. It’s just a case of biding my time and giving the manager a problem when I do play.”

Sherriff’s chances at Bower Fold have been at a premium in main due to the form of ex Manchester United man Phil Marsh who has hit 18 goals in 26 games.

However, Sherriff remains confident that he can do a job if given a chance and with Blue Square Premier side Gateshead keen to sign Marsh that could be sooner rather than later.

He continued: “It’d be a blow to lose Phil obviously given the goals he has scored but someone has to step up to the plate and why not me. Jody (Banim) has good experience that I can learn from and I’m sure that we could complement each other and score our fair share of goals.”