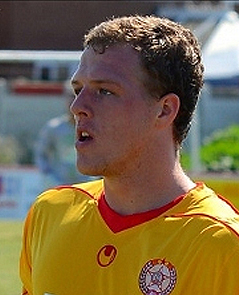 Darren Torpey was an Apprentice at Macclesfield Town between 2007 –09. At the end of his Apprenticeship he was not offered a professional contract.

Hailing from Walton in Liverpool, Torpey elected to join the newly formed AFC Liverpool and has now made over 100 appearances for the Vodkat League side.

After joining Macclesfield Town Darren Torpey progressed from the youth team and became a regular in the club’s reserve team.

Unfortunately for Torpey he was unable to force himself in to the club’s first-team and was released in the summer of 2009.

Hailing from Walton in Liverpool, Torpey made the short journey to nearby Prescot to sign for AFC Liverpool an independent football club owned by Liverpool fans.

Set up in 2008 AFC Liverpool is run on the same basis as Evo Stick Premier side FC United and current League Two outfit AFC Wimbledon.

The club were promoted to the Vodkat Premier League in the summer of 2011 and despite currently being rooted to the bottom of that division their lofty ambitions remain intact.

“The club is run professionally off the pitch and it’s now up to us to improve on it and make strides up the table. We want to do well and emulate the likes of AFC Wimbledon of course we do and the building blocks are definitely in place to help us progress,” said Torpey.

The 21 year-old left-back has become a mainstay in the Reds line-up since joining them and recently made his 100th appearance for the club in October. Torpey is the first player at the club to achieve this feat.

It’s a great who would’ve thought I would now be a centurion! Joking aside I am really pleased to be able to make a contribution to this club. I’ve had a great run since I’ve been here.”

“The challenge at this level is to be consistent over a period of games while get used to a different style of football. This is men’s football, it’s more robust and you need to be physically ready for that.”

Torpey has missed just one game for AFC Liverpool in the last two seasons.