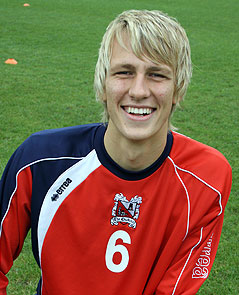 He signed a three and a half year deal with the Cottagers and now plays in their reserve team. In January 2011 Burn was named as the winner of the Mike Johnson Award.

Dan Burn is still living in a dream-land after completing a move to Fulham at the end of last term from his local club Darlington. The 19-year-old centre back who is yet to play a first-team match for Martin Jol‟s side recently cemented a place in the Cottagers second string.

Having signed a three and a half year deal with the club in the summer he has been pleased with his progress in West London so far even if it took him a little time to get used to training alongside some of his more celebrated new team-mates.

When I first came down here it was unbelievable really. I was used to seeing Danny Murphy, Clint Dempsey and the likes on TV so to be stood next to them and training with them was fantastic.”

“You soon realise what good players they are and there is a big learning curve having come from the Conference but I’m doing okay and I captained the reserves the other week so I’m definitely taking a step in the right direction.”

While Burn hopes to continue his progress at Craven Cottage and ultimately become a first-team player there he has been dismayed to see the perilous financial plight of his former club, ‘Darlo’.

The young defender may have only made 14 appearances for the Quakers but the situation in the North-East is one that remains close to his heart. So much so that he recently made a donation to the ‘Darlo Uncovered Fighting Fund’ which aims to help cover the cost of player’s wages.

“It’s been horrible to see what‟s been happening up there (at Darlington),” said Burn.

“Obviously I’ve got a lot of friends there so I’ve kept in touch with what’s been happening. A lot of the players at the club are more than capable of playing at a higher level than the Blue Square Premier so to hear about people not being paid since October is terrible.”

“Some of the lads, team-mates of mine last year, especially those with young families and other commitments are really struggling with the club falling on hard times.”

“With that in mind I felt it was right to pass on some money knowing that it will go towards helping some of those lads.”