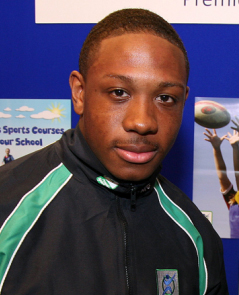 Brandon Martin was an Apprentice at Leyton Orient between 2007 – 2009, however he was not offered a professional deal at the end of his ASE programme.

Martin spent the next 12 months doing a lot of soul searching and considering his next move.

To that end in the summer of 2010 he decided to go on to the now defunct Future Jobs Fund scheme, an initiative funded by Central Government which was designed to help 18 – 24 year olds in to work.

“For a year after leaving Leyton Orient I didn’t do anything, it was difficult leaving there and knowing what to do next,” said Martin.

Through the FJF scheme I got a placement at Premier Sport and went on to start coaching, taking PE lessons and after schools clubs which I’ve combined with playing semi-pro football.”

Martin’s coaching talents honed as an Apprentice enabled him to secure a permanent position at the organisation and he has already started to map out his next career moves:

“I’m now looking at becoming a line-manager in the next 12 months and from there I want to build up my own franchise.”

In five to ten years time my goal is to be working from home a lot more with people out there delivering for me so that I can concentrate on expanding my business.”

He continued: “My advice to any young player on ASE is to take every opportunity open to you, go to the progression events and keep hold of any contacts you do make because you don’t know when you’ll need them.”