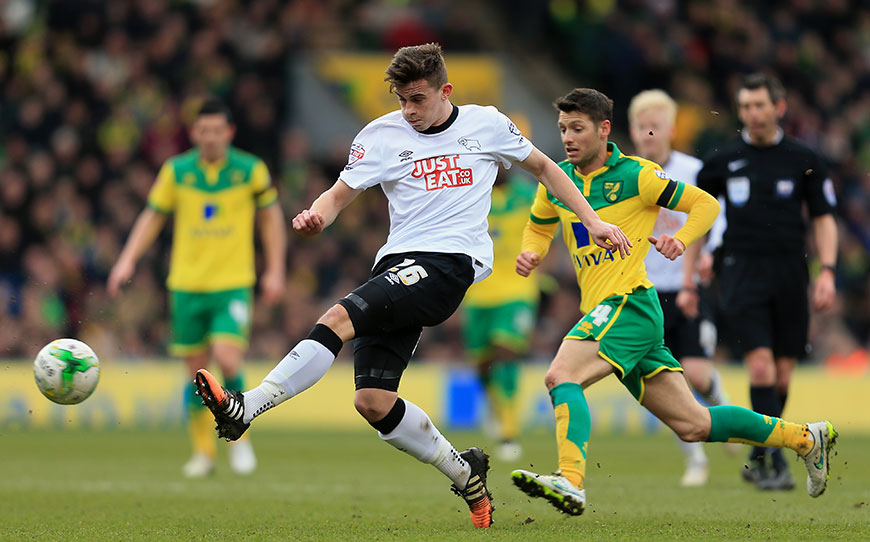 Derby County manager Paul Clement has hailed “the potential” of midfielder Jamie Hanson after the youngster signed a new 3-year deal with the club.

Hanson’s new contract will run until the summer of 2018.

The England Under-20 international who was named in the Rams starting XI for Sky Bet Championship games against Charlton Athletic, Middlesbrough and Leeds United has impressed under new Head Coach, Clement.

And despite increasing competition in that area of the pitch with the signings of Bradley Johnson and Jacob Butterfield, Clement was keen to reward Hanson his endeavours this term.

“Jamie has got great potential for the future and we have confidence in him, which is why we’ve rewarded him for his progress with this new contract,” Clement said.

“He impressed me during pre-season and when he got his opportunity in the team a few weeks ago, he stepped up and performed very well. We believe he can improve and progress further, he’s still young and has shown a willingness to learn and develop.”

He added: “It’s fantastic that Jamie has worked his way through the youth teams and into the first team. It’s a great story and fantastic for him as a Derby boy.”

Academy Manager Darren Wassall added: “I’ve said in the past that our trophies are the players that go on to play in the first team and we’re thrilled Jamie has made that step.”

“He’s a fantastic young man who is from the local area and grew up with a passion and a desire to play for Derby County. Jamie is a talented player but talent alone doesn’t get you to the level he’s at; he has a fantastic attitude and applies himself in the right way both on and off the pitch.”

“We’re proud, as a club and not just an Academy, at the number of players that have appeared for the first team; it only drives us on to make sure we continue to raise the bar and push our boundaries every single day.”

Hanson who turned professional in the summer of 2014 after completing two years as an apprentice at Derby, has spent 13 years with the club since joining their Under-8’s.

A dead-ball specialist, Hanson featured in several editions of LFE’s Goal of the Month competition and made his first-team debut in March of this year, scoring direct from a corner in a 1-1 draw away to Norwich City.

He went on to make his home bow at the iPro Stadium a few days later against Middlesbrough was also named as the club’s Under 21s’ Player of the Season for the 2014/15 campaign.