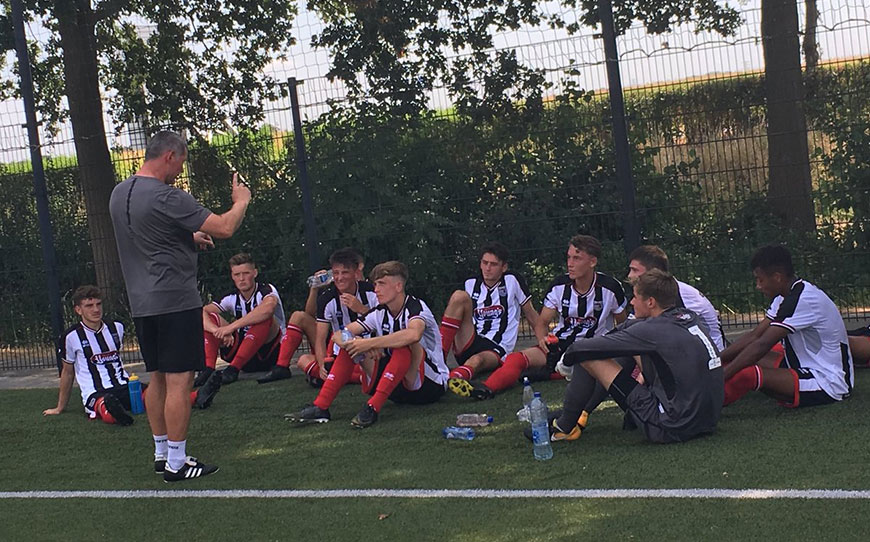 We began our pre-season trip fixtures in Holland with a game against FC Dordrecht. Town scored early on in the game through Rumarn Burrell rounding the keeper and slotting it in from a very tight angle. The team continued to push on straight after scoring, creating a few chances down the wide areas of the pitch, with crosses being delivered by Tom Jamieson and Joe Starbuck.

The hosts began to come into the game playing the ball around the back up through the midfield, but could not get past Jock Curran and Kyle Richardson.

Town continued to threaten, with a short corner taken by Brandon Buckley leading to Starbuck getting a shot away that was well blocked by a Dordrecht defender.

However, the lead was doubled soon after when the FC Dordrecht keeper was caught in possession after a back pass by Burrell inside the 18-year box, with the striker squaring the ball to Buckley to slot past the two defenders trying to cover on the line.

Straight after kick off, we continued to push with a darting run from Ollie Saunders and a pinpoint pass through to Starbuck, but with just the keeper to beat he placed his effort wide of the near post.

After a quick water break, a good ball from Starbuck in behind the Dutch team’s defence played through Jamieson, who slotted it past the keeper to stretch the lead to three goals.

No changes in personnel were made at half-time by Grimsby and the same level of domination continued as well, with Burrell showing great anticipation within the opening minute to tackle the Dordrecht keeper again from another poor back pass before tapping home into the empty net.

Mattie Pollock and Richardson both had further chances to score before numerous changes were made. It did not affect Grimsby’s attacking rhythm, though, as substitutes Deji Owoeye and Brandon McPherson made an instant impact to combine for the fifth goal, with McPherson converting from Owoeye’s square pass.

Curran then split the defence to set-up Owoeye, who slotted past the keeper, while Owoeye then took Town’s tally to seven after finishing off a pinpoint cross from Richardson, giving Grimsby a dream start to our set of fixtures in Holland.