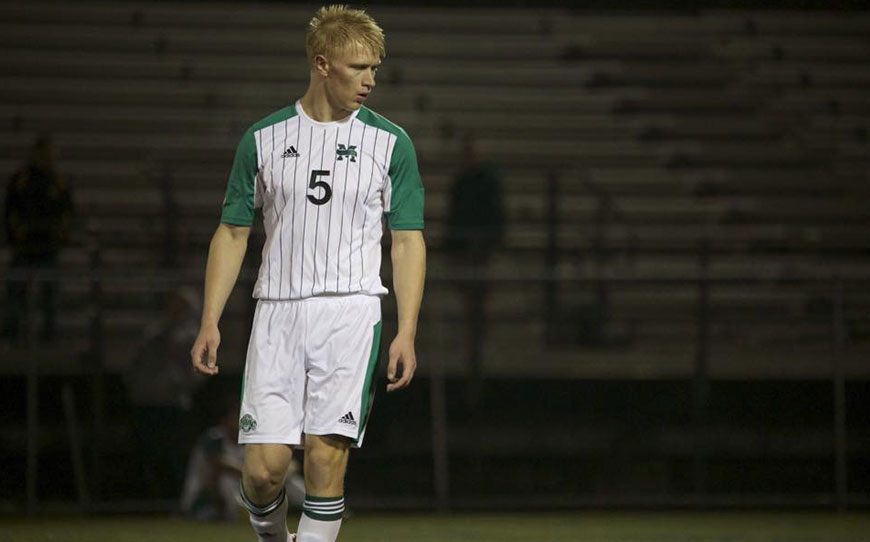 While most visit for the holiday of a lifetime, the city that never sleeps has lured former Accrington Stanley defender Luke Greaves down a new career path.

The 19-year-old swapped Accrington for the Big Apple and now studies and plays for Manhattan College. The powerful centre-back turned down the offer of a professional deal at Stanley just over a year ago.

“I chose to leave Accrington because I was thinking of my long-term future. Taking the pro deal would have been great for a year or two, but the future wouldn’t have been solid. I don’t know what I would’ve done if I hadn’t got another contract,” he told LFE.

Instead of staying at the Crown Ground, Greaves looked to the U.S. for opportunities to complement his football and academic ambitions.

“I contacted LFE and they got my information out to American coaches, who then contacted me,” he continued.

“I had my dream of being a professional in my hands but I turned it down because I wanted a future that I know I can rely on.”

The six-foot defender initially struggled to adjust to his new surroundings and found the early stages tough.

“The transition was difficult. The hardest thing is adapting to the American culture and the changes in academic standards. I really struggled during my first semester at college,” he said.

“It is a lot different from being at an English club in regards to the balance of being focused on football and academics at the same time, which can be very challenging when there is a lot of work.”

However, now into his second year, Greaves is thriving in his adopted home.

“Once I became accustomed to the differences, I realised it was the best decision I’ve ever made,” said Greaves. “I’ve been playing well here. You come up against a lot more athletic players compared to England. The American players work hard and are all really athletic.

“I think a lot of people might think that the standard is not as professional compared to clubs back home but soccer is taken very seriously in Division 1 and standards are high.”

Greaves was a key performer for the Manhattan Jaspers in his freshman year and used the summer to play in the Premier Development League (PDL) for Portland Phoenix.

“The PDL is a summer league for players who are trying to go pro, so it is a great stage for college players to impress United Soccer League (USL) or Major League Soccer (MLS) scouts,” he added.

“As a result, you are playing against some of the best college players in the country. It also gives you the opportunity to do a lot of travelling and I’ve seen a lot of great places whilst I have been here.”

Greaves was an ever-present in an obdurate backline that was ranked fifth out of the sixty-three teams involved, helping Portland to a play-off position after a 13-game unbeaten run.

While that journey ended in the Eastern Conference Championship final with a 4-0 defeat to the New York Red Bulls, Greaves is determined to use it as a learning curve.

“The PDL was a great experience. The most important thing for me is that I have continued to develop during my time here while also having a lot of fun.”

Aside from football, Greaves the student, adores the New York City lifestyle.

“The best thing about this whole journey for me is living in New York City. I just get on the subway outside school and I’m in Times Square in 30 minutes,” he said. “You can never get bored of this city; there is always something happening. Now I never want to leave.

“I missed home a lot during my first three months but after going home for Christmas and then coming back it wasn’t a problem anymore. You realise the potential that’s here.

“My plan for the next few years is to keep working hard on and off the pitch and to see where it takes me whether in football or a career in business in New York – the opportunities are endless.”