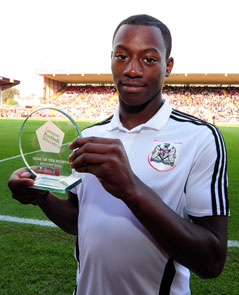 Bristol City forward Elan Gordon has seen of the challenge of four fellow Apprentice players to win the August 2011 Goal of the Month competition.

His fantastic finish at Stoke City on 20 August saw off a triple challenge from Hull City in the shape of Lewis Clarkson’s left foot effort against Rotherham Utd and two Matthew Dixon strikes.

Barnsley’s Brad Abbott and Derby County Defender Josh Lelan were also unable to challenge the Robins forward who revealed his delight at winning the public vote.

“It’s great to receive so many votes and win this award,” Gordon told LFE.

“There were some great goals in the mix so it’s very pleasing to win but I’d like to also thank my team-mates because ultimately if they don’t do their jobs I won’t get chances to score.”

Gordon’s goal in the potteries attracted almost 45 per cent of the public vote, over double the tally of his nearest challenger Lewis Clarkson and the hit-man was keen to pay tribute to those that voted for him.

“I’d like to thank all the Bristol City fans and any members of the public for their votes. It’s huge confidence boost and it’s great to receive such fantastic support.”

“It is a reward for all the hard work he puts in on the training ground.

The top three Apprentices voted for by the public (and number of votes) were:

The standard of goals submitted is a fantastic advertisement of the quality of the Youth Alliance and Academy Leagues.

Gordon is the first Apprentice to automatically qualify for the 2011-12 goal of the season competition.