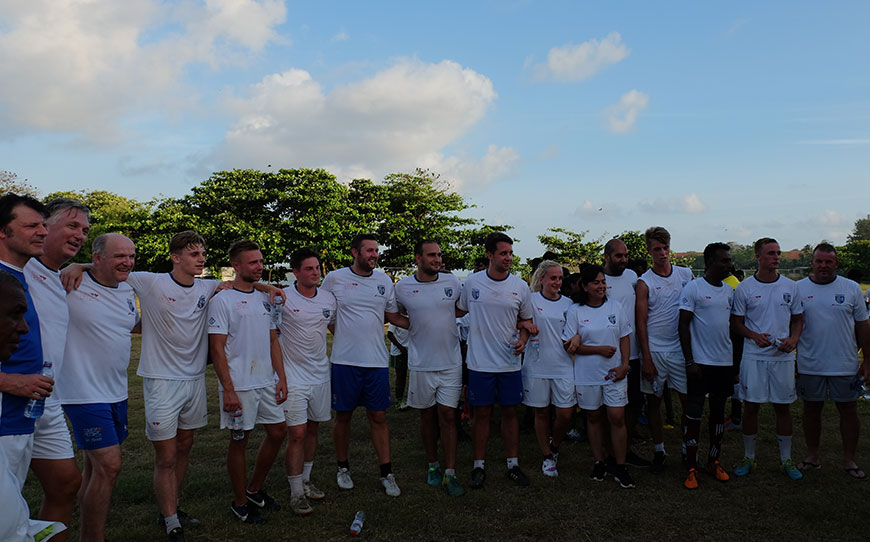 Three Gillingham apprentices embarked on a once-in-a-lifetime trip to Sri Lanka last September to support the club’s official charity ‘Take Heart Mercy Mission’, which aims to save the lives of children with life-threatening heart defects.

The organisation is affiliated with the Gills as a result of the Elliott Scally Trust, which was founded by club Chairman Paul Scally after his son passed away due to a condition caused by heart disease in July 2003.

Medics from the Evelina London Children’s Hospital volunteer to take their expertise to the Karapitiya Teaching Hospital in Galle, where they have operated on over 250 desperately ill children over the past 13 years, as well as providing training for the local doctors and nurses and fundraising for additional equipment to improve the quality of service made available within the hospital.

Gills Under-18 trio Jack Tucker, Theo White and Henry Woods were given the opportunity to join the mission to offer their own support to the Sri Lankan community.

Academy manager Mark Patterson told LFE: “Over the last few years, coaching staff from the football club have gone out into the local community to deliver coaching sessions to boys and girls at the local schools, running side-by-side with the medical staff who are in the hospitals.

“The Chairman asked me if it would be beneficial to take the apprentices. As soon as he offered that, I said it would be a great experience for them because they can see how other people have to live.

“We know the Sri Lankan economy isn’t as fruitful as in England, particularly after being hit by the Boxing Day Tsunami in 2004. They haven’t got the same level of opportunities or facilities or equipment as English kids do, so it was just a great experience for them to go and work in an environment that they otherwise might never get to.”

Having made the 16-hour trip to the Subcontinent, the second-year apprentices – whose names were pulled out of a hat in a random draw – delivered sessions to hundreds of local children across the 10 days.

Patterson continued: “It wasn’t easy for them because they had decent sized groups and the facilities weren’t brilliant, but it was great for them to experience coaching in a different environment and you’ve got to adapt.

“One day when they were setting up the goals, one of the local cows was chewing at the back of the net. At another venue, you wouldn’t have let your dog walk across it in case they cut their feet. It was terrible, there was glass and stones and yet the kids just didn’t care, they just got on with it. So it was certainly an eye-opener for the lads, but they acquitted themselves really well.

“We met a lot of people out there and the overriding response was that they’d conducted themselves professionally, they were very mature and they showed themselves and Gillingham Football Club in a positive light, which was really pleasing. They were really good role models for the club.”

The trip was not solely focused on coaching, however, with the players able to explore the local area, while they also visited the hospital to observe the amazing work of the medics at first hand, even sitting in on one of the operations.

“It was fantastic to see how professional they were and how they engaged with the local community and staff,” Patterson said. “They were talking to the doctors and nurses and it was really good to stand back and watch them interact with everybody.

“They conducted themselves brilliantly and I think the experience of coaching and going to the hospital and seeing the open heart surgery performed on a young child has had an impact on them. I’m sure it will have given them memories that will live with them for a lifetime.”

Here are the thoughts of the three apprentices involved as they reflected on their time helping the Take Heart Mercy Mission in Sri Lanka:

I’d never been somewhere like Sri Lanka before, so I wasn’t really sure what to expect. We were based in quite a poor area so we took over a lot of equipment like shirts and footballs and they were really appreciative of that. Some of the kids had boots five sizes too big for them and some had none at all, so we were able to provide them with boots that we’d got together from local charities back in the UK.

We had just completed our Level 2 Coaching qualification, so it was good to go out there and put that into practice. It definitely helped with different drills and techniques and also how we would approach the kids as there was obviously a language barrier.

The other aspect of the trip was seeing the work of the doctors out there. I wasn’t sure if I wanted to go in to watch the open heart surgery at first, but when you get in there you can’t take your eyes off it. It was a surreal experience to see a young child with his chest open and his heart on show right in front of your eyes and I’ll never get to see that again, so it was a breath-taking experience really.

They said they’ve carried out over 200 heart surgeries since the club started going out to Sri Lanka, so it is great work that they’re doing out there and it was unbelievable to watch them in action. They were so focused on the job but at the same time they seemed so calm. They just seemed like a proper unit and trusted each other completely in what they were doing, which I guess is something we can relate to back home playing football.

I didn’t expect the trip to be as fulfilling as it ended up being. It was crazy to see the conditions that they have to deal with as they’re still trying to rebuild the surrounding area after the big Tsunami a number of years ago.

We had the opportunity to go to the hospital a couple of times and we watched an open heart surgery, which was definitely not for the faint-hearted but still an amazing experience. The work the charity do is fantastic. The team of doctors are amazing and it was great to see how close the bond was between the coaches and doctors. They save lives at the end of the day, which is incredible.

As for the coaching, we couldn’t do very detailed drills because it was too difficult for them to understand, but it was good to be put in that situation where you’re dealing with kids and trying to keep them entertained while teaching them some skills.

It’s made me so much more confident because I don’t think I would ever have pushed myself to do that sort of thing, but I think once you’re out there, you’re communicating all the time with different people and that opportunity to practice and mixing with a different environment definitely builds your confidence and ability.

I learned how much more capable I am at certain things and it’s made me realise that the more things you get involved with, the more experiences you have and can learn from and it’s probably the best thing I’ve done.

It was a fantastic experience to go out there and mix with a completely different community. It’s not just given me amazing memories, it’s also really developed me as a person.

Before going out there I was probably quite shy, but the trip really developed me as a person, having to approach people that I’ve not met before like the doctors and nurses and children that we were coaching. The coaching also helped my communication skills and improved my confidence. It has actually made me consider a future career in coaching if football doesn’t work out or I have to retire.

Obviously, you’re representing the club and we were always wearing the kit, so with that comes responsibility to behave in the correct manner and taking that to a completely new environment was a great experience.

Seeing the doctors in action was another incredible experience. Watching the surgery, it didn’t seem like a real person. It was mind-blowing to see what they are doing out there, I think it’s amazing. We saw the positive impact that the coaching sessions are doing for the community and then it was amazing to see the other aspect of the charity, which is to save the lives of the children.

It definitely gave me time to realise how much I want to succeed in football and when I came back it really helped me to kick on because I realised how lucky I am to be in this position.