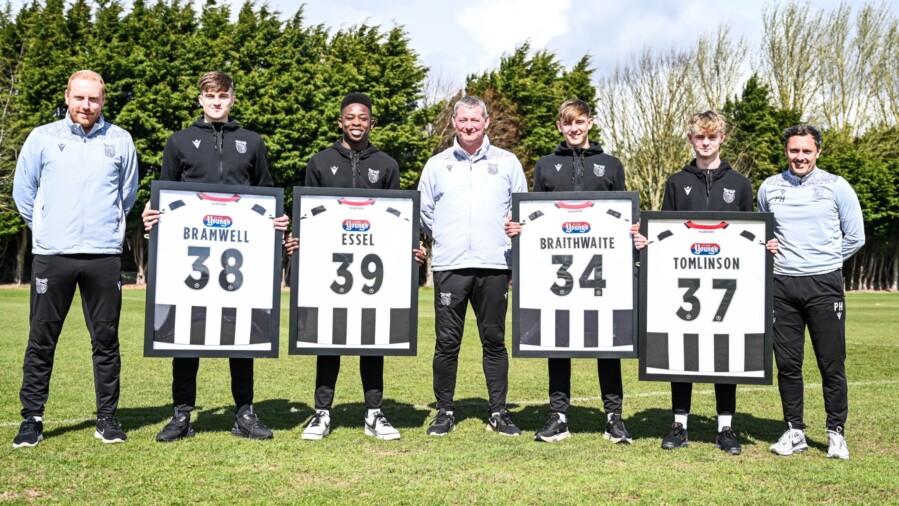 After a promising season in the EFL Youth Alliance North East, Grimsby Town have handed professional contracts out to four of the club’s apprentices – Jamie Bramwell, Aaron Braithwaite, Edwin Essel and Harvey Tomlinson.

Bramwell joined the Mariners after being released by Premier League outfit Newcastle United at 16. Despite playing the majority of his football in central defence, Jamie is equally as comfortable playing in the heart of the midfield, having impressed in both roles throughout his two-year apprenticeship. The 6’3″ youngster has established himself as a regular starter in the reserve team this season.

Unlike Bramwell, Braithwaite has progressed all the way through the Mariners’ academy system after impressing during an open trial session as an eight-year-old. A tenacious midfielder with an eye for a pass, local lad Braithwaite is from Grimsby and has been an ever-present in the Under-18s and reserve sides this season. He was involved in the first-team squad during the club’s FA Trophy tie at Stockport earlier in the season.

Essel joined became a Mariner one year after Bramwell, joining as a 10-year-old and quickly earning himself the reputation as a pacy centre forward with an eye for goal. During his time as an apprentice, Essel has also featured regularly for the club’s reserve side and went on to make his first-team debut in a 3-1 victory at Torquay this season. Since then, he has gone on to make two more first-team appearances, including a substitute appearance against Bromsgrove Sporting in the Emirates FA Cup.

An exciting attacking midfielder, Tomlinson joined Grimsby Town from local rival Scunthorpe United as an Under-13. Much like his peers, the 18-year-old has featured regularly for the club’s reserve team over the past two seasons and was included in the first-team squad last campaign. During his time as an apprentice, Tomlinson has chipped in with an impressive 15 goals and 16 assists at Under-18 level.

After the ink had dried on their professional contracts, the talented quartet spoke to the club’s media team to convey their thoughts. You can watch the interviews below: