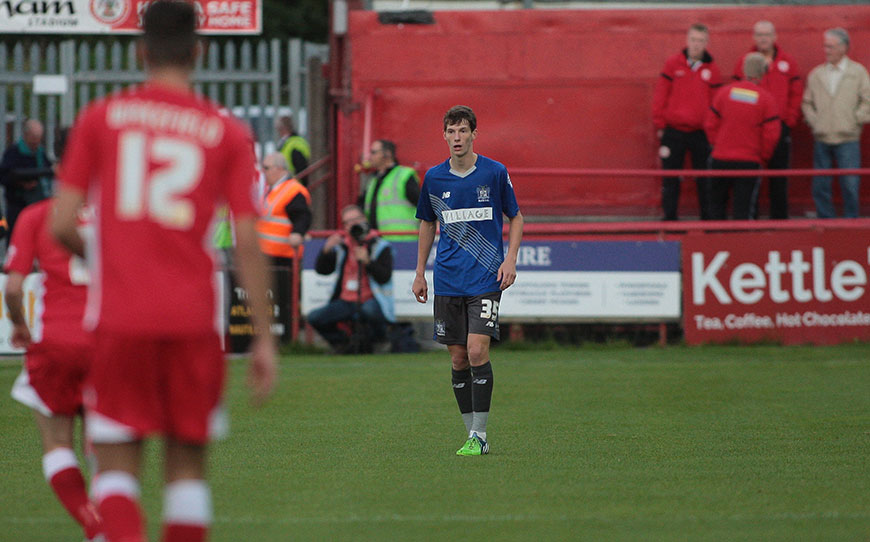 A deal to take Foulds to Everton was concluded last week and the 17-year-old has experienced a meteoric upturn in fortunes since being released by Bradford as an Under-16 player.

The young defender has featured twice in the Shakers first team this season.

“Matty’s got great potential,” Kidd told LFE. “He’s super cool on the ball, he’ll drive out of defence with the ball and he’s a good defender.”

“He played left midfield for Bradford but had one game there at centre half. We’ve played him at centre half, we’ve educated him and Everton and a host of clubs have wanted his services. Everton won the battle for that so we can’t stand in his way.”

“I think he’s got tremendous talent and a real top future in the game.”

Foulds, who has already been compared to John Stones by Bury first-team manager David Flitcroft, joins the Toffees for an initial fee of £225,000.

“I spoke to Matty the other night, just wished him all the best and he told me he might be going to play for the Under-21s in Porto next week so I wondered why he ever moved,” Kidd joked.

“When a lad turns round and he says that, that’s why you can’t deny them these sorts of chances. Everybody at the academy that has worked with Matty Foulds while he’s been at Bury for the last 12 months can take great pride.”

“We’ve got a player who was released by Bradford, didn’t cost us anything and within 12 months we’ve turned it into quite a profitable move for the first team.”

The young defender is part of a growing production line evolving for the Shakers since their move to the Carrington Training Centre in February.

Youth graduates Scott Burgess and Anthony Dudley have both featured for the first-team this season, while current apprentices Jack Ruddy and Khalid Mohammed have also joined Foulds in the senior setup.

“I think the style of play that we have here is conducive to educating these kids and obviously training with the first team a lot during the day enhances that as well so they get a taste of that physicality early,” Kidd added.

“We’ve got a lot of backing from the chairman, from the first team, from the director of youth and it’s good coming to work and knowing that youth is important.”

“It is important at Bury Football Club and I think that’s showing at the moment with the amount of lads we’re getting through, but we’re not just happy with that. We want to take this as far as we can.”

Kidd believes the structure is in place to continue the success for many years to come.

“I think if you watched any Bury football team Under-9s to Under-16s they’d all play the same way, and then from the youth team and going into the first team. The future will only tell how many lads we can get through but at the moment things are going the right way.”