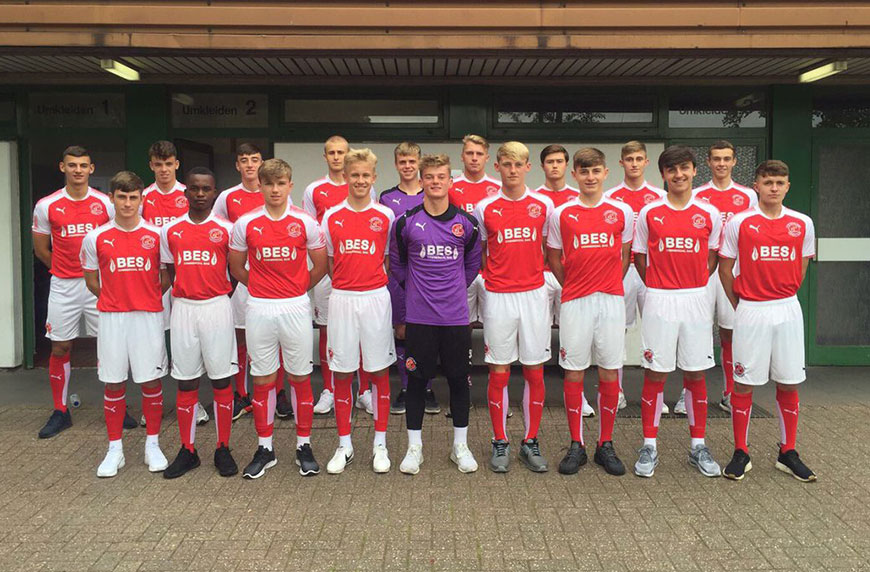 Fleetwood Town Under-18s got their LFE trip off to the perfect start with a 1-0 win against MSV Duisburg Under-17s thanks to Sam O’Halleron’s first-half strike.

The Cod Army youngsters produced the victory despite a whirlwind 24 hours, having only arrived at their Delden base in the Netherlands the previous day before making the 90-minute trip to Germany.

Town began the game brightly by executing a high press and controlling possession, while their opponents used a more defensive approach by sitting very deep throughout the game.

O’Halleron gave a warning of what was to come prior to his goal when he got in behind the defence and converted an excellent left-foot volley, but his effort was ruled out for offside.

However, the German side did not learn their lesson as the 16-year-old broke the deadlock just moments later from the penalty spot having being sent tumbling to the ground by a trailing leg after committing the defender with a fake shot.

The young striker composed himself and calmly placed the ball into the net to get Fleetwood off the mark on their trip abroad.

The game followed a similar pattern after the break, with the tourists in command of the ball and striving to extend their lead.

And despite squandering a handful of chances to double their advantage in the second-half, the team comfortably held on as the hosts rarely threatened to give Fleetwood an impressive winning start.