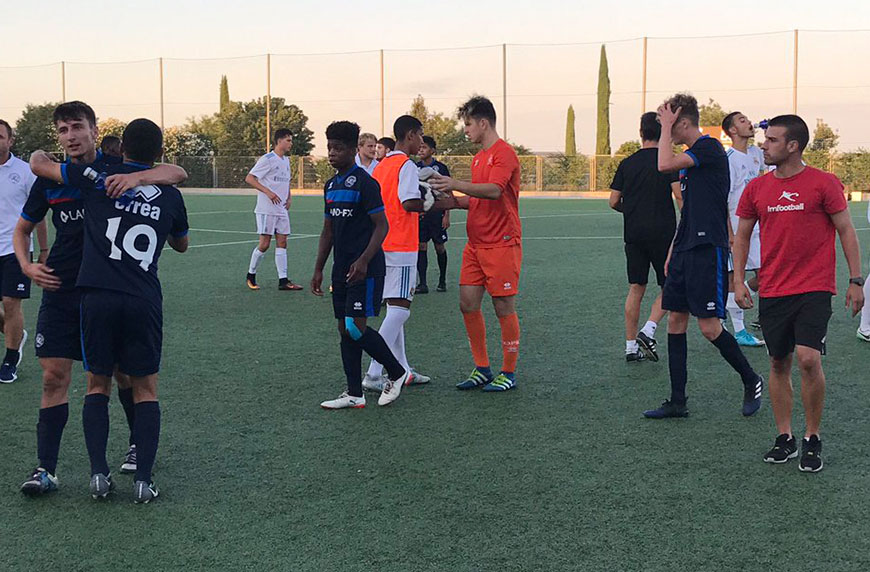 The LFE trip to Spain is coming to a close as the English clubs played their third and final fixtures.

QPR were featured live on Real Madrid TV for their clash with the Spanish giants, while AFC Wimbledon were put to the test against Atletico Madrid. Elsewhere, Huddersfield Town were looking for a first win on tour as they faced Sevilla.

Here’s how they fared in their last preparations before returning home for the start of the new Academy league season:

Dylan Hersey netted a second-half equaliser for AFC Wimbledon as they completed their fixtures in Spain with a magnificent 1-1 draw with Atletico Madrid.

Widely regarded as one of the best academy teams in the country, Atletico’s attacking threat was largely nullified by the young Dons in the first half as they maintained a solid defensive shape.

However, a lapse in concentration immediately after the break allowed the hosts to go 1-0 up to undo all the good work Wimbledon had done in the first 45 minutes.

The Wombles made a swift response to going a goal behind and managed to level the scoring through Hersey and were soon on the front foot in search of a winner.

The English side went close to snatching a lead with a couple of efforts from distance that whistled past the post, as well as spurning a 1-v-1 situation with five minutes remaining.

But the visitors were delighted to secure a draw to complete their set of fixtures in remarkable fashion by holding an incredibly talented Atletico outfit.

Huddersfield’s difficult trio of games came to a disappointing end as they were beaten by Sevilla despite controlling large portions of the match.

It took 26 minutes for the home side to break the deadlock but the young Terriers worked hard to avoid a repeat of the 5-0 reversal they suffered against Cadiz.

The travelling team were well worthy of an equaliser and should have had one when they were awarded a penalty, but they squandered the opportunity by failing to convert the spot-kick.

Lively forward Dom Tear was then unlucky to hit the post as Huddersfield edged closer to restoring parity, but it was not meant to be as Sevilla were clinical in front of goal in the latter stages.

The Spaniards were handed a dubious penalty of their own, which they duly scored before hitting the visitors on the counter-attack in stoppage-time to add a third.

Rangers were in front after just 68 seconds when Leonardo Ribeiro’s cross from the right flank was poorly dealt with by Madrid keeper Toni, allowing Mickel Platt to poke the ball home from six yards out.

The lead could have easily been doubled moments later after more good work from Ribeiro as he raced to the byline and hit a low cross towards Platt, who teed up Amrit Bansal-McNulty to force Toni into an athletic fingertip save.

R’s stopper Myles Bowman was then called into action and twice denied the Spaniards but could do nothing about a third effort at goal as Grau’s strike was deflected in off Caden Genovesi.

And Madrid completed the turnaround on 20 minutes when Martin went on a jinking run through the defence until he was thwarted by Bowman, leaving Franco to pick up the loose ball and calmly work an opening before curling the ball into the top right corner.

Bansal-McNulty almost provided an immediate reply as he drilled a shot straight at Toni, while Francis-Adeyinka was also unable to find a way past the Spanish keeper.

QPR continued to threaten the Madrid goal after half-time as Francis-Adeyinka again went close, while substitute keeper Harvey White pulled off a couple of terrific stops at the other end to keep the R’s within touching distance.

And they were finally rewarded for a tremendous display when Francis-Adeyinka struck a leveller with a fine finish in the final minute of the game to earn a memorable draw for the team.

Colchester ended their Spanish adventure on a high note smashing five past Real Betis. Their 5-1 win ensured the U’s remained undefeated and acted as the perfect run-out ahead of returning to domestic duties.

After a goalless first period, hat-trick hero Callum Jones set the tone for what was to follow in the second half. His pressing shortly after the break, allowed Colchester to steal possession resulting in the opening goal for Ollie Sims.

Creative midfielder, Dean Ager then doubled their advantage. Ager who has a reputation for scoring from midfield, once again displayed his eye for goal after good work from Sims. Thereafter it became the ‘Callum Jones Show’.

Jones reacted quickly to score a third once Max Maughn’s shot rebounded in his direction and while Betis replied, the young striker, who is now in the second year of his apprenticeship, at the Weston Homes Community Stadium rounded off the scoring late one adding goals four and five to seal an emphatic victory.