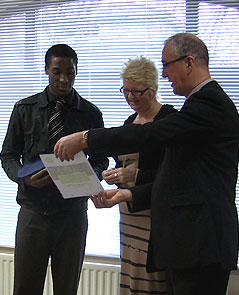 The prize is given to the youngster who has produced the best NVQ Logbook of work during their two years as an Apprentice.

Johnson was a pioneer in the advancement of the NVQ programme for Apprentice footballers working closely with LFE.

LFE commemorated the award to Mike after his untimely death in June 2009 and it is now a lasting tribute to his services to education in youth football.

Dunkley was presented with the trophy by LFE Chief Executive Alan Sykes and Johnson’s widow Sylvia.

“It is a fitting tribute to all the hard work that Mike put in that this award will now be presented to the Apprentice with the best log-book each year,” said Sykes.

“Cheyenne is a deserving recipient after excelling at Crewe and continuously producing work of a high standard. The fact that he has now settled in at University is testimony to the work that he put in while he was an Apprentice.”

Dunkley was pleased to win the award amid fierce competition and is now focusing on the challenges in front of him after admitting he was disappointed to be released by Crewe last summer. He said:

“It’s an honour to win this award especially when you consider just how many Apprentices are out there across the League.”

“It became obvious from the way Critch spoke to me (Neil Critchley, Academy Manager) that there was going to be nothing in the offing for me at Gresty Road. I’m maybe not the sort of player that typifies what Crewe is perceived to be about but I’ll be aiming to prove them wrong and show I am capable of playing at that standard.”

“I’m playing regularly at Hednesford Town and while I’ve featured in centre midfield and at centre-half I would class myself as a defender. I’m just happy to play and do a job for the team wherever the Manager needs me though.”

“It’s a learning curve for me and part of my development, can I step up to the plate and perform against more physical opponents and older experienced lads.”

While plotting his progress back towards the professional game Dunkley admit he has been splitting his time studying for a degree in Sport & Exercise Science at Loughborough University.

“I thought it was going to be hard on the degree, it involves coaching, lab methods, sports developments but fingers crossed its going ok so far. I’m not sure exactly what I want to do but the degree should give me options in a variety of areas.”

“One thing’s for sure, there’s definitely life after football and so many pathways that you can move into,” he added.