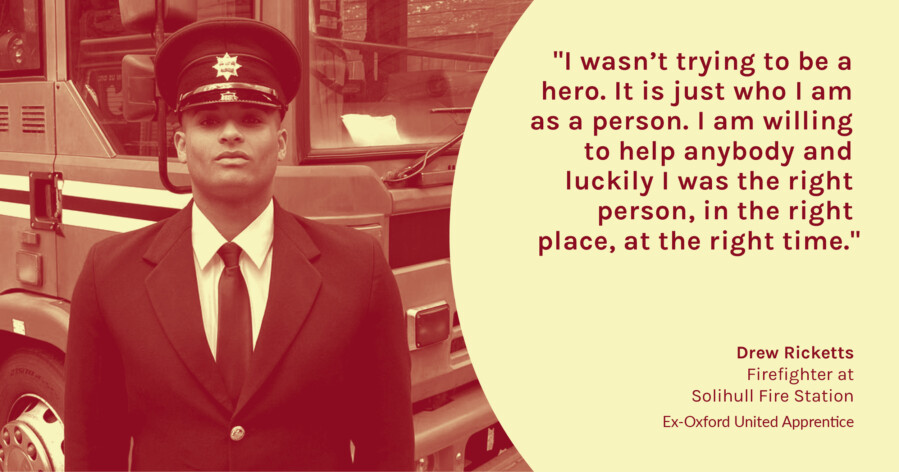 Having transitioned away from professional football in May 2015, following 12 months at Mansfield Town, former Oxford United apprentice Drew Ricketts is now protecting his local community as a firefighter with Green Watch at Solihull Fire Station.

The defender’s career path since his contract expired at the end of the 2014/15 season has been a fascinating one. From working in Bannatynes Health Club as a Personal Trainer to owning his own football coaching company, Ricketts is now thriving in the job he had dreamt of doing as a child.

“My only two hopes in life were to become a professional footballer or a firefighter,” Ricketts tells LFE. “I feel very fortunate to say I have done both.”

Since he successfully made it through the fire service’s challenging 18-month recruitment process – which consists of multiple interviews, tests and gruelling physical assessments – Ricketts has grown accustomed to the high-pressure situations that come with the job. But what happened on the evening of November 1, 2020, while he was off duty, will live long in his and many others memory.

“It was just an ordinary night. Me and my partner were on the way to drop a parcel off at her friend’s house and as we came out of a petrol station in Billesley, I could see a woman standing in the middle of the road turning people around,” Ricketts explains.

“Initially I didn’t think much of it but as I took another look, I could see that there was a car with the windscreen caved in. Someone was calling for help and people looked distressed, so I grabbed my gloves and mask out of the glove box – which I carry around with me in case of an emergency – and I ran over to help.”

As Ricketts approached the casualty, who was lying face down and was unresponsive, he quickly realised the severity of the situation.

“A woman told me that there had been an accident involving a man and that he wasn’t breathing,” he says. “Another woman was kneeling next to him in silence, which I knew was a sign of shock.

“It was clear that the gentleman had suffered significant injuries; he had multiple wounds to his head and there was no pulse.

“In the fire service, we call those situations a Category One incident, which means that it is an incident involving life-threatening injuries. For most people, running into that and being told that somebody isn’t breathing could have been overwhelming, but because of my job, I have been trained to control my emotions in those types of environments. It was almost second nature.

“Because he had multiple open wounds, I had to try to mitigate the bleeding before initiating CPR. Luckily, I had my football bag in the back of my car, so my partner got a towel out and that helped.”

As Ricketts carried out chest compressions, he was also on the phone to the emergency services. His partner counted each compression, while he informed the ambulance crew of the situation, how many crew members were needed and the location of the incident.

“I went into work mode. You can’t explain it to somebody that hasn’t had that experience, but when I was providing treatment, it was like I was back in training school and my tutor was telling me what to do. Everything just came flooding back to me.”

After two rounds of CPR, there was still no sign of life. For each second that passed, the tension grew.

“We do a Level Three first aid course at work, which is basic life support,” Ricketts says. “You learn about techniques and signs. After two sets, I had no response; but on the third set, on the twentieth compression, he gave me a breath and a painful groan. That told me that he was reacting to what I was doing.

“He lost consciousness again shortly after, but there was a faint pulse there. I put him into the recovery position and it was at that point that I saw the blue flashing lights and the ambulance crew arrive.”

Months went by without Ricketts knowing whether the victim had survived. He had returned to his everyday life, wondering whether the man recovered. One day, someone reached out to him.

“It was the man’s family member. They told me that he had been in a coma for three weeks, had punctured both lungs, broke every limb in his body, but was back at home recovering,” Ricketts says with relief.

“With my job, I don’t really know what happens after they go to the hospital, but on this occasion, they found out where I worked, what station I work on and last Christmas they sent me some chocolates and a voucher to say thank you.”

Ricketts’ decisiveness saved a man’s life. It also resulted in a nomination for a Pride of Britain Award, after his name was put forward by the man’s family. The Pride of Britain Award was devised in 1999 and exists to honour British citizens who have acted bravely or extraordinarily in challenging situations. The pride he felt when discovering the news is a moment Ricketts will never forget.

“It was on 27th May 2021 – two days after my birthday,“ he says. “I went into work and the gentleman’s family had left me a card with a fire angel teddy bear, and in the card, they expressed how they can’t thank me enough and how they wouldn’t ever be able to repay me for what I did. It was then that they mentioned that I had been nominated for the Pride of Britain and Pride of Birmingham Award. It was surreal. I didn’t know how to take it.

“Unfortunately, I didn’t win it but that wasn’t why I did it. I wasn’t trying to be a hero. It is just who I am as a person. I am willing to help anybody and luckily I was the right person, in the right place, at the right time.”

Since the nomination, Ricketts has rediscovered his passion for football, having fallen out of love with it after exiting Mansfield Town. When he is not working, he plays for local non-league teams on a Saturday and Sunday, as well as managing his own coaching business. Despite temporarily turning his back on the game, he has always treasured the memories made during his apprenticeship at The U’s.

“When I left Oxford, I found it difficult moving around, being away from home and not knowing where I was going to be from one season to the next,” Rickets admits. “I took some time away from it and it was just what I needed.

“Through coaching, I have found my love for football again. I got my Level Two coaching badge through my apprenticeship and that really helped me with the coaching side of things. It’s my way of passing on my football experiences. I get a lot of enjoyment out of watching players learn.

“With my actual football, I have thought about giving it a go again, but it is difficult to commit with work. I am just enjoying playing again.

“I have such great memories of my time at Oxford. Those years stay with you. I think I saw more of my teammates and coaches than I did my family. My old coach Leon Blackmore-Such actually messaged me after he heard about the Pride of Britain nomination; that was nice to hear from him.”

With support from the PFA, Ricketts also completed a fitness instructor course, which helped him land his first job after football. He believes the skills and qualifications gained during the LFE apprenticeship programme have helped over the past five years.

“You don’t realise it at the time, but the whole experience helps you – not just in football, but away from it too. Even today, the skills I use at work are all things I learned at Oxford.

“I moved away from home at 16 and went straight into working in a team environment. The camaraderie you get in a dressing room is very similar to the fire service. Our lives are in the hands of each other and, in a sense, football is the same.

“Respecting authority is another transferable skill that not many talk about. I think it is extremely important and something that you learn from a young age in football. You have to respect and listen to seniority, whether that be your manager, captain or an experienced player. That is massive in the fire service because you have to respect each rank.”

For information on transition or careers, please visit https://www.lfe.org.uk/careers-advice/