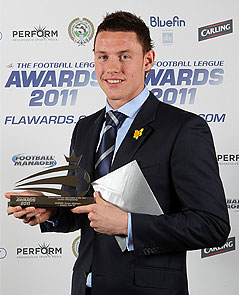 The Town striker saw off Watford midfielder Will Buckley and Norwich’s Henri Lansbury (currently on loan from Arsenal) to win the Football League Young Player of the Year Award. The Tractor Boys youngster was also named as the Championship’s Apprentice Player of the Year.

Speaking after picking up the Apprentice Player of the Year Award, Wickham said:

“I am delighted to win this award, it has been great coming through the Academy at Ipswich. There are some brilliant people there and I hope this award will inspire them. The younger players are still my mates and I just hope that a lot of them will come through like I have to play for the first team.”

The 17 year old’s double triumph at the Football League’s gala night makes it a hat-trick of trophies for the England U21 international in the space of a few weeks, following on from his accolade as the npower Championship Player of the Month for February.

Wickham, who turns 18 at the end of the month, joins up with the England U21 squad this week for friendlies against Denmark on March 24 in Viborg and Iceland four days later at Preston’s Deepdale.