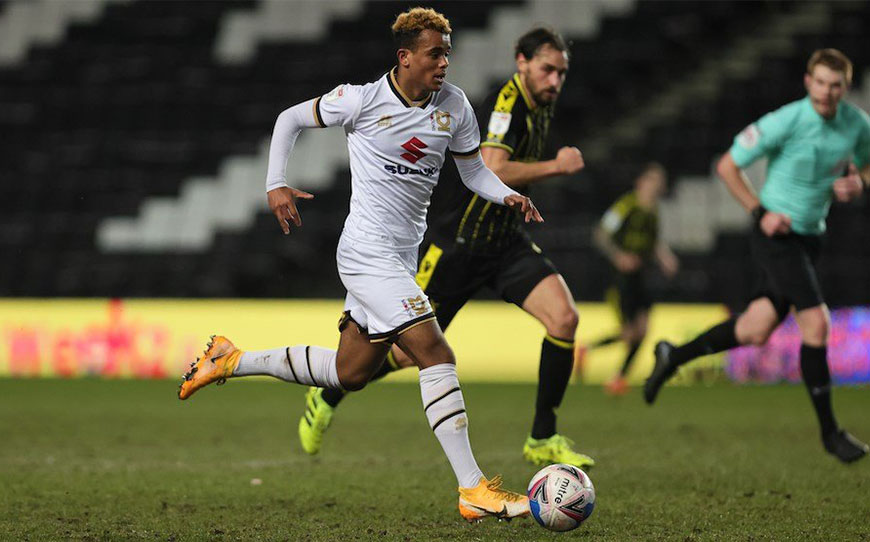 The 17-year-old made his senior bow in the Papa John’s Trophy in November, playing the full 90 minutes against Southampton Under-21s.

In total, the highly-rated attacker has featured nine times across three competitions, including four Sky Bet League One appearances and a late cameo during a 1-1 FA Cup draw with Burnley at Turf Moor.

“It’s a great feeling,” Johnson told the club’s website. “A lot of hard work has gone in to get to this point and I’m just grateful to the manager, all the staff here at MK Dons and my family too.

“The club have been brilliant with me ever since I joined here from Aston Villa. Every member of staff and all my teammates have wanted me to succeed and helped me get to where I am now.

“I’ve become a much better player, and a person, for being with the first team this season too. I’ve grown so much and the aim now is to kick on, keep developing and hopefully help the team climb up the leagues.”

Manager Russell Martin added: “Lewis has certainly deserved this contract. He’s had a few opportunities with the first team this season and he’s taken his chance.

“He is another exciting young player that we wanted to commit to developing. He’s very versatile and can play in a number of positions. Physically and emotionally, he is very mature, especially for his age.

“There is still got a lot of work to do but he’s if he continues to show the same attitude, and continues to grow like he has already, then I have no doubts that he will get more opportunities.”

Academy Manager Jon Goodman said: “It’s vindication for the hard work that Lewis has put in during his short time with us.

“We missed him as a young player – he went and signed for Aston Villa after being in our SET (Sport and Education Trust) programme. Thankfully, though, he found his way back to us as an Under-16 and he’s flown since then.

“He has developed tremendously during his time with MK Dons and we are delighted for him and his family.

“This is just another example that we have a clear pathway that runs from the academy through to the first-team, and a manager in Russell Martin who is brave enough to give minutes to academy players.”