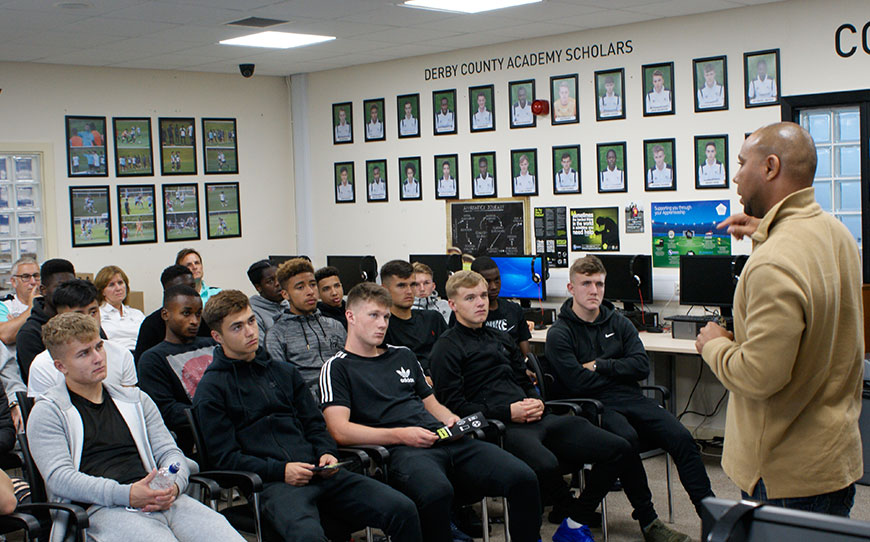 Derby County’a Academy players increased their awareness of the dangers of addiction during an LFE Life Skills session delivered by The Sporting Chance Clinic.

Whitley told LFE: “There’s a lot of peer pressure. A lot of the players will have friends that are doing things and there will be that pull of wanting to be a part of that.

“I think some of the other players will get to that cross point of actually having to make those decisions of pulling their weight and detaching themselves from some of their friends that they’ve grown up around because there has to be sacrifices for young footballers, that comes as part of the path to trying to make it as a professional footballer.

“I think now a lot of the players at football clubs have so much support compared to 10 years ago. They’ve got so many outlets, which for these young players is phenomenal.

“These lads can access the service (Sporting Chance Clinic), not now, not next week, in a few years, 10 years time…they’ll be PFA members for life.”

It was a hard-hitting seminar for the young Rams, who were given the necessary information and tools to help them steer clear of addiction.

“I thought it was really useful to learn from past experiences of Jeff and everything he’s been through and I thought it was a really productive and helpful meeting,” said striker Cameron Cresswell.

Fellow first-year scholar Joe Bateman echoed his thoughts: “I think the session was very helpful because it provided a lot of information on topics you don’t tend to think about, especially at such a young age, but they are obviously issues that can massively affect your life.”